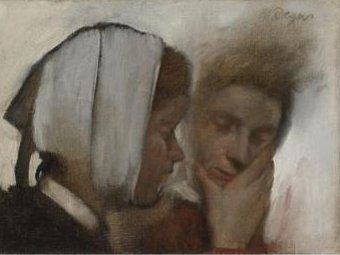 Back in France after 37 years Blanchisseuses Souffrant Des Dents ( Laundry Woman suffering from a toothache), a painting by Edgar Degas which had been stolen from US museum in 1973.

It is assumed that the picture was painted in 1871-1873. Art collector donated it to the French government and it was registered with the Louvre Museum.In 1961, the Louvre lent the painting to the Malraux Museum in Normandy.

In late 1973, a still-unknown thief pulled it off the museum wall and slipped away.

On 2nd of November, 2010 in New York were scheduled auction of Impressionist and Modern Art. Looking through the catalog of the works of art, Malraux museum employee came across a lot of the stolen painting. Although it is a work of a few tens of centimeters in Sotheby’s auction catalog this painting was estimated at $350-450.000.Employee notified Sotheby’s, which immediately pulled painting  from the auction.

French and American police initiated an investigation to establish how the stolen artwork was presented in one of the two largest auction houses. Sotheby’s officials said that before the auction, Sotheby’s had checked to see if the piece was listed on the London-based Art Loss Register — which tracks stolen, looted or missing art — and similar databases. But they said they didn’t find it listed.

“Back when the master impressionist worked, his painting was perhaps considered too modern,” said Francois Rivasseau, the French ambassador to the United States. “So you will find more Degas in the U.S. than here.”

The identity of the current owner of paintings by Degas was not disclosed. The French Culture Ministry said that this man is respected in the art auction community. However, the current owner, who says he has inherited the painting from his father and acted in ‘good faith’, faces up to 20 years in jail according to American law.