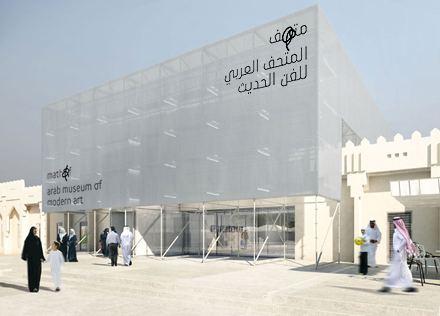 The masterpieces are displayed among other treasures making a collection of almost 6,500 pieces in Mathaf (museum in Arabic), which has gathered works of Arab modern art masters previously scattered among private collections and national museums.

“There was no museum devoted to Arab modern art in this part of the world,” said Nada Shaboutt, a guest curator and consultant at Mathaf.

Qatar, which had already established the largest museum of Islamic art in the region, opened the doors of Mathaf on December 30, 2010 as part of the state’s ambitious cultural policy.

The new museum holds the largest collection of Arab paintings and sculptures in the world, including works by artists from most Arab countries.

Sheikh Hassan Al-Thani, a member of the Gulf state’s ruling family, donated his collection, which totals some 6,200 pieces, to the Qatar Foundation and the Qatar Museums Authority, which jointly established Mathaf.

Among the hundreds of works acquired at full price by anonymous buyers at Christie’s or Bonhams auctions in Dubai is a painting by Egyptian master Mahmoud Said (1897-1964) which sold at an April 2010 auction for 2.43 million dollars.

Entitled “Les Shadoufs”, the work depicts Egyptian peasants drawing water from the Nile using the weighted pivot-and-bucket system of the picture’s name. The price paid was the second highest ever paid for a painting by an Arab artist.

“It is impossible to show all the works that we have here at one time,” Khudairi said, adding that Mathaf would organise regular thematic exhibitions.

The museum’s first exhibition spotlights some of the greatest Arab artists of the 20th century including Said, Syrian Fateh al-Moudarres, Lebanese Paul Guiragossian and Shafiq Abboud, and Iraqis Dia Azzawi and Jawad Salim.

Mathaf is currently located in the outskirts of Doha in Education City. The building was previously a school but was redesigned for the museum by French architect Jean-Francois Bodin.

The off-white building combines modern exterior touches with an all-glass facade above the entrance, with traditional shapes and designs.

The interior is predominantly white, except for the art, giving it a modern and antiseptic arty feel.

The museum is taking the first step “of discovering and archiving” Arab modern and contemporary art, before expanding its activities, Shaboutt said.

The establishment of the museum is a part of “the process of cultural change underway in Qatar,” she added.

The wealthy Gulf state of 1.5 million inhabitants, the majority of them foreigners, is trying to establish itself as a cultural hub in the Gulf region.

It has competition from oil-rich Abu Dhabi, which is constructing a “cultural district” on Saadiyat Island that is to include eight museums, among them branches of the Guggenheim and Louvre.

In 2008, Qatar opened the Museum of Islamic Art, home to a rich collection of 800 artistic and historical treasures from three continents, illustrating Islamic culture from the seventh to the 19th centuries.

The five-storey building, designed by Chinese-American architect I. M. Pei, whose other projects have included the Pyramide du Louvre in Paris, was built on an artificial island 60 metres (yards) from the Doha Corniche.

Qatar also has an ambitious programme for higher education.

Education City, which houses local branches of six American universities including Georgetown, Northwestern and Carnegie Mellon, is a project of the Qatar Foundation which is headed by Sheikha Mozah bint Nasser Al-Missned, wife of the emir.

Shurooq Amin was welcomed in Qatar as a poet and banned in L...
The Most Expensive Painting Ever $250m Bought by Qatari Roya...
Artistic Treasures of the Islamic World in March, Doha by So...