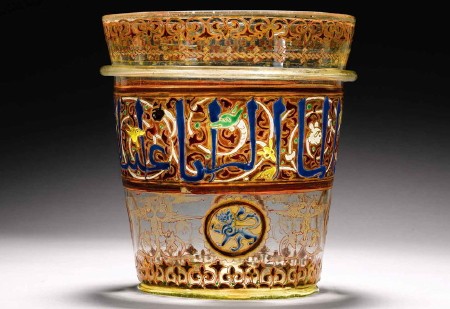 Sotheby’s will mount an exhibition at the Ritz Carlton Hotel in Doha from the 5th-6th March 2011 which will be highlighted by an extraordinary group of objects assembled by the late scholar and collector, Stuart Cary Welch.

Ranging from striking and beautiful Qur’anic scripts and other works of calligraphic inspiration through remarkable illuminated manuscripts and weaponry created for the Safavid, Mughal and Deccani courts, these works will be auctioned at Sotheby’s London 6 April 2011 sale.

Stuart Cary Welch was one of the leading art historians of his generation and devoted his life to the study and teaching of Islamic art and culture, as well as being an inspired collector renowned for his brilliant eye and exquisite taste.

The exhibition will include an illustrated folio from what is universally acknowledged as one of the supreme illustrated manuscripts of any period or culture and among the greatest works of art in the world – the Shahnameh made for Shah Tahmasp of Persia, the son of the founder of the Safavid Dynasty.

The Shahnameh or ‘Book of Kings’ is the Persian national epic and the folio in ink, opaque watercolour and gold on paper to be offered at Sotheby’s is a work of extraordinary quality and beauty. It depicts Faridun in the guise of a dragon testing his sons (estimate: £2,000,000 – 3,000,000).

A magnificent Ruby-Set Dagger with gilt-copper zoomorphic hilt made in the second half of the 16th Century is a superb example of another great artistic tradition of Islamic history, the Deccani Sultanates of South India. With a pommel which depicts a composition of fantastical and naturalistic beasts, including a deer attacked by a tiger which is itself being bitten by a dragon, the dagger is a most powerful and exuberant display of royal grandeur and visionary craftsmanship. In it, an extraordinary range of artistic stratagem and motifs are unified into one object that encapsulates, in its dynamism and decorative range, the epitome of Deccani art. It is estimated at £50,000 – 80,000.

A striking painting of Sultan Ali Adil Shah II hunting tiger is a relatively rare example of Deccani courtly painting to have survived from the 16th and 17th centuries as well as being one of the most glorious, rich and mesmerising of Deccani portraits. Showing both Iranian and Mughal influence, it depicts the radiant, and yet almost dreamlike figure of the Sultan as he looses his arrow towards a tiger crouching on the rocks in front of him. Created circa 1660, the watercolour on paper is estimated to bring £60,000 – 80,000

Following on from Sotheby’s successful sale Hurouf: The Art of the Word in Doha this past December, the exhibition will offer some exquisite examples of calligraphic art. A large illuminated Qur’an Folio in eastern kufic script on paper made in ink and gold on paper in Persia or Central Asia, circa 1075 – 1100 is an example of one of the most striking and beautiful Qur’anic scripts. Estimated at £60,000 – 80,000 , it originates from a Qur’an of majestic elegance and breathtaking graphic power and is one of the most luxuriously decorated Qur’ans of the mediaeval period.

The Throne Verse (Ayat Al-Kursi) in the form of a calligraphic horse, in ink, opaque watercolour and gold on paper, in India circa 1600 is a calligraphic masterpiece (estimate: £20,000 – 30,000). In a superb technical and artistic achievement the artist has written the entire Throne Verse, one of the most popular verses in the Qur’an, forming the gold letters and words in an extraordinarily inventive and skilfull manner into an elegantly prancing horse.

Other highlights in the exhibition will include drawings, watercolours and decorative objects ranging in date from circa 900 to the 19th Century. Doha, Qatar, is the first stop on an international travel schedule which will continue in New York, to be exhibited during the Asia Week exhibitions.

A celebrated connoisseur and collector, Stuart Cary Welch was also a curator, scholar and gifted teacher. His contribution for over half a century to the study of the art and aesthetics of India and the Middle East was second to none. Through his innate understanding and intense feeling for Indian and Islamic art, especially painting and drawing, he was able to enlighten and lead others towards a richer and deeper appreciation of the subject. Testament to his infectious enthusiasm for artistic beauty and to his inspirational gifts as a teacher is the distinguished role-call of students and friends who went on to become scholars, collectors, curators and museum directors in their own right.

Stuart Cary Welch’s career as a lecturer at Harvard (1960-1995) was complemented by his role as curator of Islamic and Indian Art at Harvard Art Museums spanning over forty years. His remarkable eye and his ability to marshal artistic and didactic themes were seen in the pioneering and rightly admired exhibitions that he organised and curated. These ground-breaking exhibitions revealed a whole new and exotic world of art to the public in the USA and Europe. Stuart Cary Welch also published extensively, and his many publications speak eloquently of the depth and breadth of his knowledge and learning. The monumental two-volume publication “The Houghton Shahnameh” (1981), co-authored with Martin Dickson, was a landmark study, which had a profound influence on the whole subject of early Safavid painting. Furthermore, his donations to Harvard Art Museums and the Metropolitan Museum of Art have given these institutions outstanding additions to their permanent collections.

Part II of The Stuart Cary Welch Collection: Arts of India will be sold at Sotheby’s in London in May 2011.