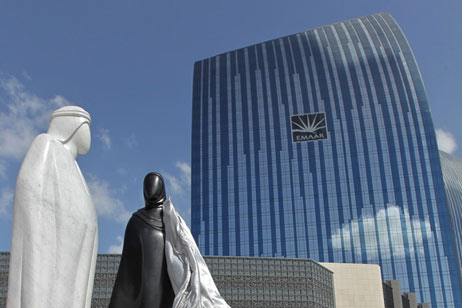 A sculpture of a traditional Gulf couple, unveiled in Downtown Dubai some days ago, is intended to contribute to the area’s evolution as a cultural and arts centre, said Mohamed Alabbar, the chairman of Emaar Properties.

The white marble and black granite figures of a man in a khandoura and a woman in an abaya, called Together, have been placed on Emaar Boulevard, close to the entrance of the Burj Khalifa.

The 4.25 metre statues were designed by the Syrian artist Lutfi Romhein. “Man and woman – they stand for the origin of life, as well as the door of life,” the artist said. “They stand for strength and tenderness. They are different, yet so similar.”
Romhein sculpted Together in Carrara, Italy working from a small wooden model. The marble for the male figure was extracted from the Carrara mountains. The granite used for the female, also used to create the base, comes from Sweden.

Samia Saleh, the owner of the Courtyard Gallery which commissioned the sculptures admires Together’s expression of unity. “They cannot exist without each other,” she said.

The work is the third piece of public art to be erected in the area since last May.

“The Arab world has a rich artistic and cultural heritage” which is given “modern interpretations by our talented artist community,” Mr Alabbar said.

“Through our art showcases in Downtown Dubai, we are putting the spotlight on the region’s high creative and artistic standards.”