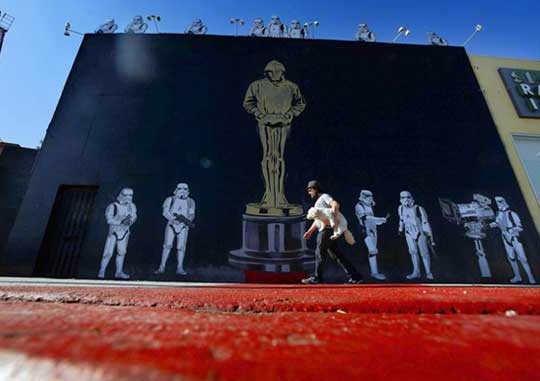 Heading into Sunday’s Academy Awards, “Exit Through the Gift Shop” is undoubtedly the most buzzed-about film in the documentary feature category. But the uncomfortable question persists: Is it real?

The movie is anchored by two of the least reliable narrators in memory: Banksy, the anonymous British street artist; and Thierry Guetta, an eccentric French émigré to Los Angeles whose obsessive filming happens to capture the world of high-concept graffiti. In alternating interviews, the two recount the rise of anti-establishment vandals into the upper echelons of the art world, where their work quickly became commodified.

Guetta was born in 1966 in Garges-lès-Gonesse, a seedy suburb a half-hour drive north of Paris, the youngest of five children of Tunisian Jews who had moved to France to escape persecution.

His mother died when he was a child, and when Guetta was 15, his father moved the family to Los Angeles. Public records show his Social Security number was registered in the early 1980s. For months, they stayed in a cheap hotel on Fairfax Avenue — today’s boutique Farmer’s Daughter Hotel — before settling in a nearby apartment. His father soon returned to France and passed away, leaving Guetta and his siblings to fend for themselves.

He attended Fairfax High for about a year, despite speaking no English. After dropping out, he said he started organizing nightclub parties in Hollywood that became popular with the celebrity set.

“I was trying to be an adult right away,” he recalled.

He also got a job at a vintage clothing store in Venice, starting out on a ladder to keep an eye out for shoplifters. But he showed up early and stayed late, was promoted to manager and eventually bought out the owner, he said.

Between 1985 and the late 1990s, records show Guetta launched a series of businesses with names such as Vintage Supermarket and Rugsaver: The Vintage Shop, his store on La Brea. Guetta said he imported cheap used clothes from France and repackaged them as designer vintage, occasionally selling them as templates to high-end designers like Ralph Lauren.

He and his brothers also began designing clothes, sewing scraps of jeans into jackets and finishing them with Looney Tunes characters cut out of beach towels. The look took off, Guetta said, and soon they were selling at stores in Los Angeles, New York and Miami.

Eventually, Warner Bros. caught wind of their unlicensed success. But rather than shut them down, Guetta said, the company hired them. The story was confirmed by Warner Brothers, whose consumer products executives recall employing the Guetta brothers to design products sold in the Warner Bros. Studio Store in the 1990s and eventually giving them a merchandising license. The relationship ended around 2006.

“They were credible in that marketplace and they presented themselves as a credible creative and style force in an influential part of the market,” said Barry Ziehl, a spokesman in the consumer product division. “It made them smart partners.”

Discover Banksy’s pieces locations with iPhone App
Are you ready for the JAMM Auction tonight ?
France received back a stolen painting of Edgar Degas”...