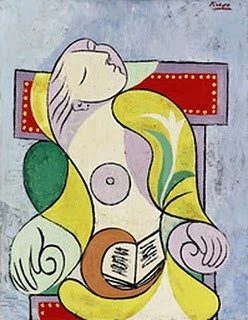 Sotheby’s Impressionist & Modern Evening sale was led by Pablo Picasso’s iconic 1932 painting of Marie-Thérèse Walter, La Lecture, which sold to a round of applause for $40,711,612 , more than double the low estimate ($18.5-27.8 million).

Following a heated bidding contest that lasted six minutes among at least seven bidders, both on the phone and in the saleroom, the work finally sold to an anonymous buyer bidding over the telephone. Achieving a strong total of $111,023,004.

Helena Newman, Chairman, Sotheby’s Impressionist & Modern Art Europe, said: “We were thrilled with the price achieved for Picasso’s La Lecture – an exceptional work from one of the artist’s most celebrated periods. The painting attracted strong pre-sale interest from across the globe, which was manifest in the depth of bidding we saw tonight – no fewer than seven bidders drove the price to a final £25.2 million. Across the sale as a whole, buyers came from 11 countries, with bidding from Asia, Russia, the US and Europe.”

The sale of La Lecture brought the painting to Europe for the first time since it was painted in 1932.

It is one of a series of defining works in the artist’s oeuvre in which he introduces his young lover Marie-Thérèse Walter as a recognisable figure. The couple’s relationship was kept a well-guarded secret for many years, both on account of the fact that Picasso was then still married (to Olga Khokhlova, a Russian-Ukrainian dancer he had met on tour with Diaghilev) and because of Marie-Thérèse’s age (she was just 17 at the time).

Until the period in which this work was painted, Marie-Thérèse only ever appeared in Picasso’s works in code, her features often embedded in the background of his paintings. But by the end of 1931, Picasso could no longer repress the creative impulse that his lover inspired, and over Christmas and New Year 1931 and ‘32, Marie-Thérèse emerged, for the first time, in fully recognisable, languorous, form.

• A further highlight of the sale was one of the most important works by Marino Marini ever to come to the market: his monumental sculpture of horse and rider L’idea del cavaliere sold for $6,750,390. Similarly, Henry Moore’s important large-scale Reclining Connected Forms achieved $3,318,139.

• Lyonel Feininger’s oil on canvas Raddampfer am Landungssteg of 1912 sold for $5,124,587  more than double its high estimate, selling to a buyer in the saleroom following an extended battle among five bidders. This rare work, showing the artist’s inventiveness at the height of his involvement with the German Expressionist movement Die Brücke, had not appeared at auction since 1949.