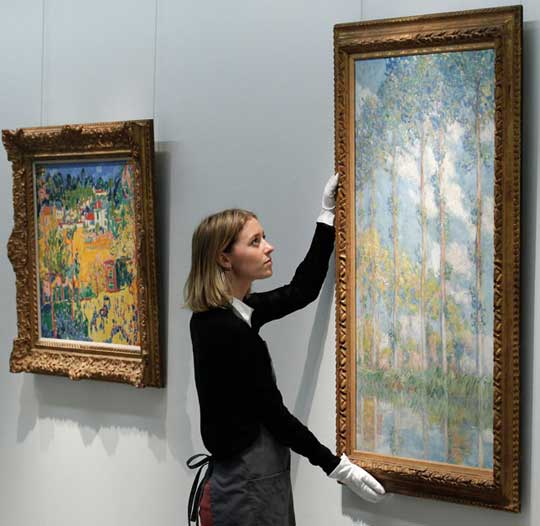 A Christie's employee poses with artist Claude Monet's "Les Peupliers" The piece, estimated to fetch up to $30 million REUTERS/Luke MacGregor.

Christie’s Impressionist & Modern Art Evening Sale 4th of May, 2011 in New York achieved $155,995,500, demonstrating the continuing appeal of this category among collectors worldwide. Three works sold for over the US$20 million mark, and two new artist records were set for the Fauve artist Maurice de Vlaminck and the neo-Impressionist artist Maximilien Luce.

The top lot of the sale week for any auction house was Claude Monet’s Les Peupliers, one of the most celebrated of the artist’s great series of works from his years in Giverny. Painted en plein air during the summer of 1891, the work is the largest of the artist’s paintings devoted to a picturesque arrangement of poplar trees. Offered in pristine condition from an important private collection, the painting sold for $22,482,500 to a private American collector. The painting was last sold at Christie’s in 2000 for $7 million – a three-fold increase in value just over 10 years.

“Tonight’s results demonstrate the lasting appeal of great works in this global marketplace. Impressionist and colorist works performed very well, as did Modern and Surrealist works from important private collections. It was fascinating to see this marked increase in value play out across multiple genres tonight, from Monet’s Poplars, to the record-breaking Vlaminck landscape, Paysage de Banlieue, which sold for $6.8 million in 1994 and went on to achieve more than $22.5 million in our saleroom tonight,” said Marc Porter, Chairman of Christie’s Americas.

In addition to the top-selling lots by Monet and Vlaminck, Pablo Picasso’s Les femmes d’Alger, version L, from the artist’s groundbreaking 1955 series of 15 paintings, fetched $21,362,500. Maintained in a private collection for over 50 years, the painting was purchased by an anonymous bidder.