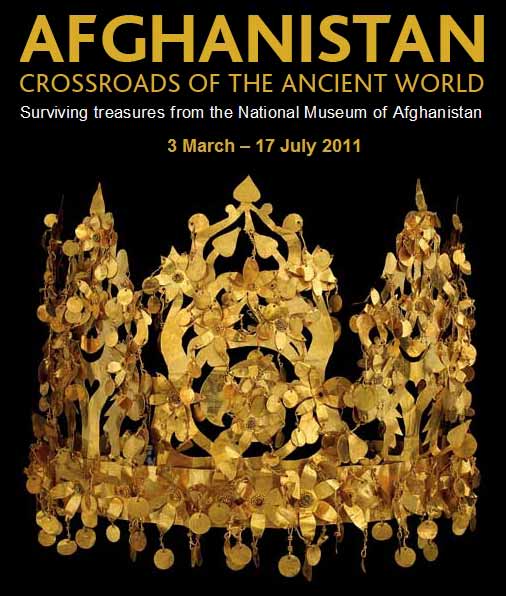 Afghanistan: Crossroads of the Ancient World highlights some of the most important archaeological discoveries from ancient Afghanistan and displays precious and unique pieces on loan from the National Museum of Afghanistan in Kabul currently undergoing reconstruction.

The exhibition showcase over 200 stunning objects belonging to the National Museum of Afghanistan, accompanied by selected items from the British Museum. The artefacts range from Classical sculptures, polychrome ivory inlays originally attached to imported Indian furniture, enamelled Roman glass and polished stone tableware brought from Egypt, to delicate inlaid gold personal ornaments worn by the nomadic elite.
The earliest objects in the exhibition are part of a treasure found at the site of Tepe Fullol which dates to 2000 BC, representing the earliest gold objects found in Afghanistan and how already it was connected by trade with urban civilisations in ancient Iran and Iraq. The later finds come from three additional sites, all in northern Afghanistan, and dating between the 3rd century BC and 1st century AD. These are Ai Khanum, a Hellenistic Greek city on the Oxus river and on the modern border with Tajikistan; Begram, a capical of the local Kushan dynasty whose rule extended from Afghanistan into India; and Tillya Tepe, (“Hill of Gold”), the find spot of an elite nomadic cemetery.