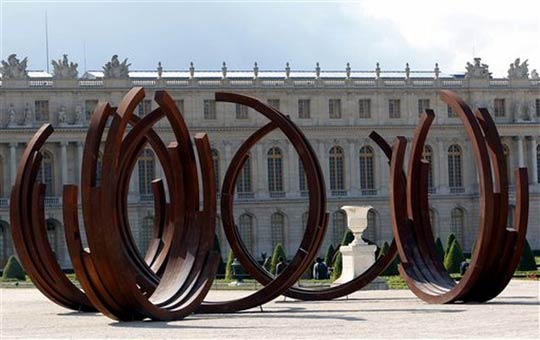 A monumental sculpture of the french artist Bernar Venet in the Versailles Palace gardens, west of Paris. The event runs from June 1st to November 1st, 2011. (AP Photo Bob Edme)

Bernar Venet is the Palace of Versailles’s guest in 2011. He is taking over from Takashi Murakami who, as we know, attracted considerable interest and sizeable crowds in 2010. The exhibition is on view from June 1st through November 1st, 2011.

The Palace of Versailles chose Bernar Venet to showcase a French artist’s meticulous, intense efforts to probe the question about the relationships between art, landscapes and architecture, and therefore between art, time and history. It is also the first time that this institution has decided to display an annual contemporary art exhibition work of art in the Marly Estate, which it is now responsible for. 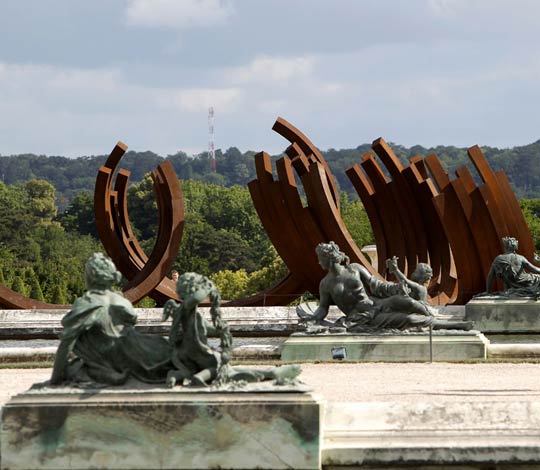 He moved to New York in 1966, discovered minimal art there, and continued experimenting with tubing blueprints, reproducing scientific drawings solely to distil the evocative, meaningful views. The neutral images were stripped from any artistic addition and devoid of the artist’s subjective eyes. He exhibited alongside the day’s minimal and conceptual art top names – Sol LeWitt, Donald Judd, Carl Andre, Dan Flavin, etc. – in Dwan, Paula Cooper and other galleries. He hones a 4-year programme to delve in the various branches of science, and decided to end his artistic career at the end of that period. 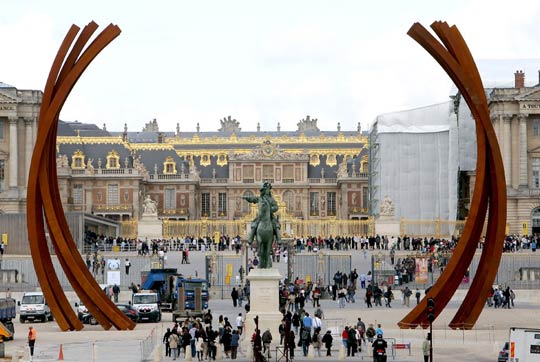 That period ended in 1971 and Bernar Venet started working on retrospectives on his work and speaking around the world (including a lecture cycle at the Sorbonne). When he resumed his artistic career again in 1976, he picked up the mathematical formulae again, and his paintings and sculptures took a formalist turn. He distilled the notion that randomness is mathematical into a series of lignes indéterminées sculptures, “doodling” them to no particular aesthetic agenda or predefined pattern. Then he moved on to sculptures comprising arcs providing depths to the various angles, which define and compose them. There is something strikingly material about Bernar Venet’s Corten steel arcs, and they provide meaning for their surroundings. The line variants – arcs, tilting arcs, vertical arcs, collapses, etc. – add up to Venet’s vocabulary to broach the issues that sculpture has to deal with, i.e. the relationship with the body, balance, setting and so on.

He made the mainstream with exhibitions featuring his sculptures around the world (inter alia in Paris). In Versailles, he will be baking over the eminently classical and distinctly geometrical Palace gardens, which radiate the rules of perspective. He is fully aware of this symbolic aura enveloping this place, and set out to underscore the lines, capture the coherence, and cast a new light on it – on occasion using contrast, i.e. a overlapping a collapsing view and the exactly drawn lines (for example, something that looks like a wreck, not lacking in form yet deliberately anti-formal, between the Bassin d’Apollon and the Grand Canal, enthroned in the par-excellence architectural gem that is Versailles). Bernar Venet was born in 1941 in Château-Arnoux Saint-Auban, in the Alpes de Haute Provence (France). He lives and works in New York and Hungary.