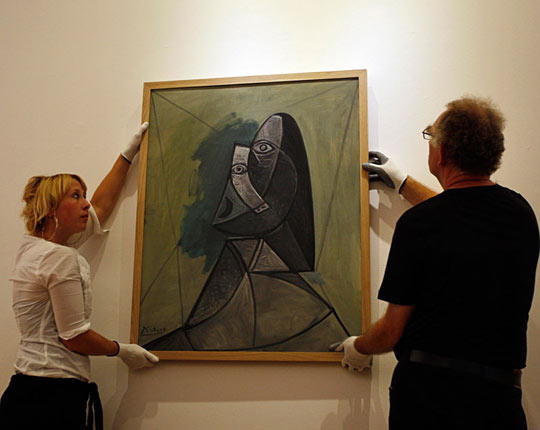 A Palestinian art academy on Monday put on display a $7 million Pablo Picasso masterpiece, the first of its kind in the West Bank.

Picasso’s 1943 “Buste de Femme” is on loan from the Van Abbemuseum in Eindhoven, Holland. Organizers said they had to overcome a lack of reliable transport and several Israeli checkpoints along the way.

The art director of the Palestinian academy, Khalid Horani, said it took two years to arrange the loan. He said the painting’s journey was “a story full of details and difficulties.”
The small art school in Ramallah put in the loan request in early 2010. Normally, such inter-museum exchanges are routine and take about six months to coordinate.

“Nothing is normal over here,” Horani said. “We planned to have an artwork here, but found ourselves going through all the political complications.”

Horani said the painting was flown from Amsterdam to Tel Aviv and was then escorted to Ramallah by an Israeli security company before going on display. He said the uprisings in the Arab world also postponed the artwork’s delivery.

The painting is the most valuable and prestigious Western artwork ever shown in the West Bank. It is the centerpiece of the “Picasso In Palestine” exhibit in Ramallah aimed at introducing Western art to the Palestinians.

The 39 by 31 inch (100 by 80 centimeter) oil-on-canvas work — a cubist deconstruction of a woman’s face, dominated by gray hues — is the Dutch museum’s most valuable piece of art. It has traveled before to Sao Paolo, Brazil.

For the Palestinian academy, however, it’s more than just a chance to host a renowned painting. Directors hope the loan will encourage other institutions to lend artworks to the West Bank.

“Picasso in Palestine is part of a wider development in which a typical modern art collection tries to come to terms with the social and the cultural changes taking place around us,” said Charles Esche, director of the Van Abbemuseum. “Our Picasso will be changed by its journey to Ramallah. It will take on extra meaning, and the story will remain a part of the history of the painting.”