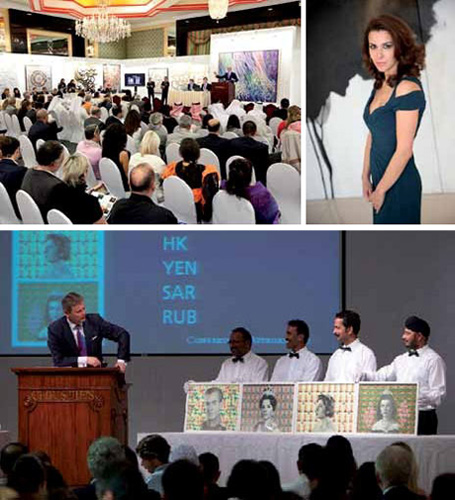 Sophie McBain on the influential princesses of the ruling Gulf-state families who are stepping up to promote and nurture an emerging art scene.

Artistically, the Gulf states were not long ago considered the Empty Quarter, but now the contemporary art scene is flourishing in the region’s oil-rich mini- monarchies. Unusually for this part of the world, the loudest, clearest and most influential voices behind the renaissance are female, and because royal patronage still drives changeand titles matter, some of the biggest movers are Sheikhas.

‘If you have a title, that works to your benefit, so you have lots of fantastic initiatives in the art world being set up by people with titles,’ explains Sheikha Lulu al Sabah, founding partner of art consultancy JAMM and the brains behind the first contemporary art auction in her home country, Kuwait.

From Abu Dhabi to Qatar, the governments of Gulf states are investing heavily in the creation or regeneration of their art scenes, and sheikhas — wives, daughters or other female members of the region’s ruling families — are taking leading roles. Some head up important art institutions:  Sheikha Mayassa, daughter of the Emir of Qatar, chairs the Qatar Museums Authority. Sheikha Hoor, daughter of the ruler of Sharjah, heads the influential and avant-garde Sharjah Art Foundation.

Others are prolific collectors. Sheikha Hussah, daughter, daughter of the late Emir of Kuwait and her husband ( son of the current emir) have amassed over 250,000 workd of Islamic art from the Seventies to the present day. Sheikha Paula Al Sabah, another senior memeber of the Kuwaiti royal family (and Sheikha Lulu’s mother), is an avid collector of contemporary art. In Abu Dhabi, Sheikha Salama’s personal collection of over 400 works opened to the public in 2008.

The trend of royal patronage is both influential and diverse, sweeping from top-down national initiatives to small grassroots projects. In Bahrain, for instance, Sheikha Mai became the region’s first Minister for Culture and is a driving force behind projects to preserve Bahraini Heritage, while in Dubai Sheikha Latifa, daughter of the late ruler, has set up arts centre Tashkeel to support a new generation of confident and articulate Middle Eastern artists.

“These women are playing an extremely important role in their nation, and the art market, but they also represent a nation, and a nation’s goals,’ Isabelle de la Bruyere, director of Christie’s Middle East, explains. Glamorous, educated and often multilingual, Sheikhas may be ideal ambassadors for a rapidly expanding art scene that is increasingly seeking (and gaining) recognition abroad and hopes to offer an alternative perspective on a region more often associated with war, autocracy and petro-dollar bling than with artistic creativity. Gulf governments hope that where the sheikhas lead, other locals will follow. Some question the sustainability of an art scene where museums precede art schools, but a sheikha can prove useful in this regard.

‘A royal lady in the region, by virtue of her pro!le, is a role model, and people follow her if they can,’ says Roxane Zand, director of the Middle East department at Sotheby’s. ‘It’s an interesting concept: when will art reach the grassroots if it’s imposed by the state? And I think that we are increasingly seeing a grassroots response,’ she adds, noting that last year 20,000 people visited Art Dubai, a significant proportion of whom were locals. De la Bruyere agrees, noting that since 2006 the number of people participating in Christie’s auctions has increased by about 20 per cent a year.
Art buying may remain the preserve of a wealthy elite, but Gulf  Sheikhas can exert an influence in other important ways. Until recently, being an artist was not considered a respectable profession. Now in the UAE alone Sheikha Hoor, Sheikha Latifa and Sheikha Hessa are practising artists, and attitudes are changing. In 2003, for instance, Sheikha Alia (wife of the late emir of Dubai) sponsored the establish- ment of Latifa College, a fine-art school for women.

There could nevertheless be limits to the power of Gulf  Sheikhas to transform the art world in their countries. In April the director of the Sharjah Biennial, Jack Persekian, was fired by the ruler of Sharjah for displaying a work by Algerian artist Mustafa Benfodil that was deemed offensive. Sheikha Hoor issued a statement apologising for the Sharjah Art Foundation sta%’s ‘failure of due diligence’ and promising to take a more ‘active role’ in the interim.

‘Patronage of the arts’ is not a licence to produce what you want, and the Gulf states are not renowned for their endless tolerance.’  Janet Rady, a curator of Middle East and Iranian art, tells an anecdote of how a 2009 issue of Canvas magazine published during Art Dubai pictured Iranian artist Ramin Haerizadeh, a large man with a beard, wearing a chador.  The authorities complained, and the next day all the images had to be blacked out.

It’s not all so black, however: government-sponsored art is rarely propagandistic and censorship is lifting. Many Gulf leaders are commercially savvy and realise that sterile, government-directed art won’t sell abroad. But the authorities may also have accepted that once an art scene develops, it tends to have a life of its own and censorship can yield unexpected, counterproductive results.

The sequel to the Canvas story shows this: the year after the adverts were blacked out, the artist framed the plain black covers from last year’s Canvas magazine and gallerist Isabelle van den Eynde displayed them at the art fair.
‘Being a royal doesn’t give them the right to explore controversial issues — in fact they may have to be more concerned about the work,’ Rady explains. Some royal patrons, however, consistently push the boundary of what is deemed acceptable, and one Saudi sheikha suffered a travel ban following her sponsorship of banned artists. Sheikha Lulu says she sometimes tapes up her works before the auction to evade government censors, and she is currently planning an exhibition in conjunction with Frieze on the subject of revolution.
Revolution is certainly topical, and as the Arab Spring extends into summer, one can only wonder how this spirit of openness in the art world will persist if Gulf leaders worry about unrest spreading to their borders. Will Gulf Sheikhas still be able to sponsor artists who question the status quo, or will they be called up to toe the family line?
Political upheaval in the wider Middle East will test not only the Gulf model of politics but also its model of royal patronage: a government clampdown now could reduce a burgeoning contemporary art scene to 21st-century window dressing for regimes rooted in the past, but if sheikhas and their families are serious about art, then the Gulf’s sandy soils may prove fertile grounds for a new generation of independent-minded artists reflecting on the Arab Spring.