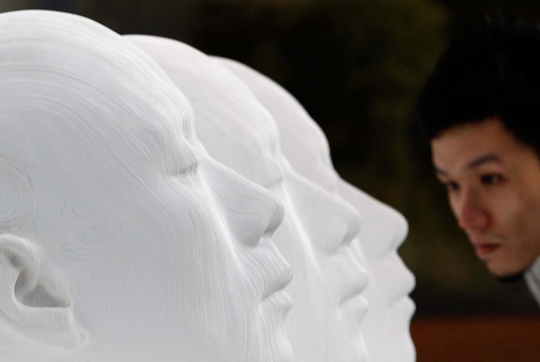 A visitor looks at Chinese artist Li Hongjun's creation "Drift Away II" during the Art Taipei 2011, August 25, 2011. The Art Taipei 2011, featuring 124 galleries from various countries, will be held from August 26-29 at the Taipei World Trade Centre. REUTERS/Pichi Chuang

The art market in Taiwan has become more and more mature since the 80’s, and today’s Taiwanese collectors, many of whom brought up in this established environment, are considered to be the best collectors in the Chinese community. Taiwan’s art galleries also pride themselves with great understanding of works and relationships with artists. Not only do galleries from Korea, Japan and Southeast Asia gather at Art Taipei each year, European and North American participants are also no strangers to the event. Furthermore, with the gate opened between Taiwan and China since 2000, galleries from China and Hong Kong at the event have increased and Art Taipei is now genuinely the most important platform for Chinese arts.

Also, the organizer of Art Taipei, Taiwan Art Gallery Association, is the important consultant in Chinese art markets. Its long-time experiences and knowledge have led to a comprehensive database of Chinese art market, which means the quality of Art Taipei is guaranteed. During Art Taipei, Art Taipei Forum (Asia Art Economy Forum in Taipei) will also be held and serves as the platform for gallery directors, scholars, collectors, and press from all over the world to share and exchange information about Asian art markets.

Since 2004, programs like “Artist of the Year”,I“Art Project”, and “Ela–Video” were introduced with the aim of brinigng great art works to Taiwan. In 2008, “Made in Taiwan–Young Artist Discovery” projects were launched, specifically designed to promote young, outstanding Taiwan artists onto the world stage.

Art Taipei 2010: the number of participating exhibitors was 111, among which 53 were international galleries. The themed sections of Art Taipei 2010, which were Art Galleries, Mega Contemporary, Ela-Video, Art Taipei PHOTO, and Made in Taiwan–Young Artist Discovery provided the audience various stimuli of art. The exhibiting galleries considered Art Taipei 2010 a great success. New records were made on both attendance and transactions. During the five-day exhibition, this international gathering of the art world attracted 40,000 artists, collectors, curators, and art lovers from around the world.