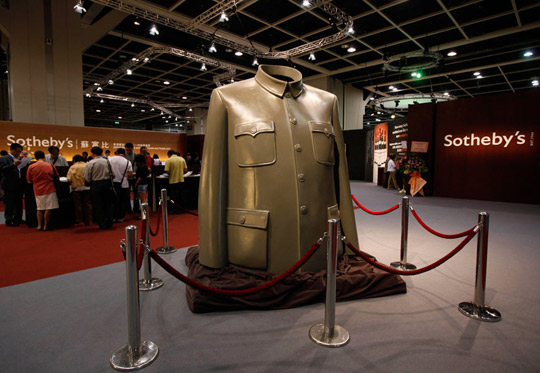 An uneven set of results from Sotheby’s autumn Hong Kong sales that wrapped up Thursday indicates that the surging Asian art market is pausing for breath amid rocky times for financial assets such as stocks.

A 15th century Meiping vase sold on Wednesday for Hong Kong $168.7 million ($21.7 million), a world record for Ming dynasty porcelain, after intense bidding by telephone that drew applause from the crowd in the auction room.

But other results from the auction of a highly anticipated collection of imperial Chinese porcelain were mixed. Another highlight, an 18th century Qianlong era vase decorated with peaches, fetched $90.3 million ($5.5 million), near the low end of the pre-sale estimate.

While the auction room was crowded with bidders from mainland China and the British auctioneer switched between English and Chinese as he called out prices, a fifth of the 41 pieces failed to sell. The sale came near the end of a week of auctions for wine, art, jewelry and other collectibles.

The sales in Hong Kong are a barometer of the Asian art and collectibles market, which has come to be dominated by newly wealthy mainland Chinese. They have helped the city become the world’s third largest auction center after New York and London.

China became the world’s biggest art market last year, accounting for 33 percent of of global fine art sales, edging out the U.S. with 30 percent, according to Artprice, which tracks market prices.

Contemporary and modern art auctions earlier in the week, which came amid a plunge in financial markets as global recession fears grew, also showed signs of weakness. Hong Kong’s benchmark Hang Seng Index tumbled 4.4 percent on Monday, followed by a decline Tuesday of 3.4 percent to a low not seen since 2009. Markets have since rebounded.

“Initial results indicate a softening of the market,” said Jehan Chu, director of art advisory service Vermillion Art Collections. “There are a lot of nervous people out there.”

Chu and others noted that there were empty seats at this week’s art sales. That’s a sharp contrast to the spring sales, where some auctions were standing room only and latecomers had to watch on video screens in an overflow room.

Art market observers said Asian buyers are getting pickier amid the wobbling financial markets. Sales of big-name Chinese artists are being snapped up while mid-tier names are being passed over.

Blue chip artists “come to market once in a lifetime,” said Andrew James, who owns a gallery in Shanghai. “You miss it now it’s going to disappear off the market for another 50, 60, 100 years so you’ve got to take the opportunity to get it.”

“Anything that’s average is going to come around again. People didn’t feel the pressure to buy it.”

Buyers were also passing over China’s contemporary artists, who have emerged in the past 30 years, in favor of “modern” artists whose work dates back to the 1920s, Chu said. In essence, China’s equivalents of Picasso and Matisse were winning out over its equivalents of Damien Hirst and Jeff Koons.

“People are retrenching to safer havens other than contemporary, which can be less stable and more speculative,” Chu said.

In Sotheby’s sale of contemporary Asian art on Monday, about 28 percent of the 176 lots went unsold.

About a fifth of works from the auction house’s sale of 20th century — or modern — Chinese art also went unsold.

In another sign of the weakening market, 59 of 821 lots failed to sell on the second day of Sotheby’s two-day wine auction, the first of Sotheby’s 17 Hong Kong wine auctions that hasn’t sold out.