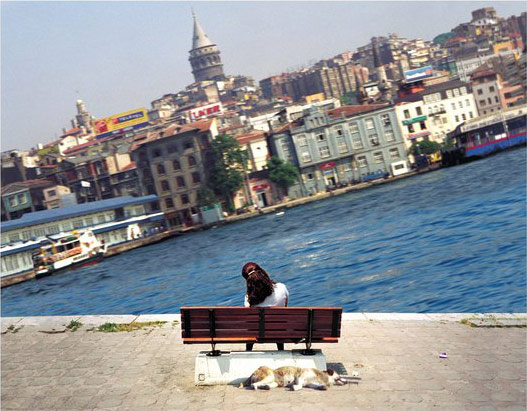 Perceptions of reality are questioned in ''Untitled, 1999'' a digital photograph of the Galata area of Istanbul by Aydan Murtezaoglu. NYTimes

“Dream and Reality” a show at the Istanbul Modern art museum, pairs “nearly forgotten” painters from the Ottoman era with some of the most intriguing artists in Turkey today.

In 1913, for example, the Newspaper of the Ottoman Painters’ Association wrote that the profession of painting and womanhood had never “agreed with each other.” It argued further that a deep love of art and the “inextinguishable” desire to paint were inherently male attributes.

But toward the end of the Ottoman Empire, daughters of the wealthy or upper-middle class intellectuals, particularly in Istanbul and especially in non-Muslim families, were encouraged to learn to paint, to speak French and to play the piano, Mr. Calikoglu noted, all in an effort to appear more Westernized.

Even so, being an artist was not encouraged as a career track, since society’s main objective for women was to fill roles as wives and mothers.

“Art for women was considered a mere hobby, a pastime,” he said. “Professionally speaking, men monopolized art, just as they did the word ‘genius.”’

This was not the case only in Turkey, of course. “I don’t think the Ottoman society presented a more constraining environment than that experienced by French Impressionist women artists,” Mr. Calikoglu, chief curator for the Modern, said. “If we consider the examples of Mary Cassatt or Berthe Morisot we can realize how Ottoman and French women artists stood up to similar difficulties” inherent in the social roles assigned to them.

In the 1920s, the Turkish Republic continued to send artists to Europe for study and training, as ambassadors of a sort for the new Turkey. According to the “Dreams” exhibit catalog, when the figurative painter Mihri Musfik, who was born in 1886, traveled to the United States, a Turkish newspaper referred to her 1928 visit as “powerful and effective propaganda in America on behalf of Turkey and the Turks.”
………………………………..