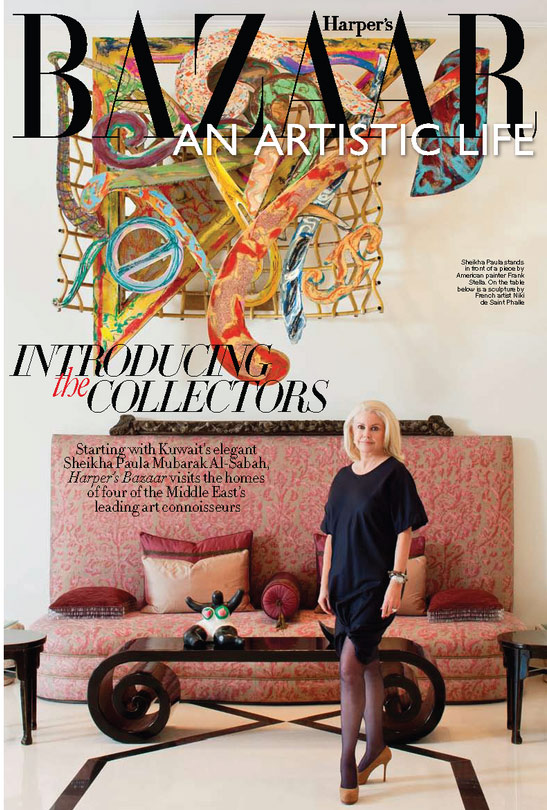 ” I bought my first painting in New York’s Greenwich Village when I was a student in 1960s. Even though I had no money at that time, I bought it anyway. It was such a vibrant place for art then”, says Sheikha Paula Mubarak Al Sabah wistfully.

“The painting, like much of her impressive collection was lost during the war in Lebanon. “It was destroyed along with our apartment by the bombing in Beirut. In fact our art has suffered from war conditions twice – later our collection was decimated during the Gulf War after the 1994 invasion.Sadly “act of war” is not covered by insurance companies.”

Remaining sanguine about this double tragedy, Sheikha Paula’s enthusiasm is undiminished and she has since rebuilt the collection – the Dar Noor – concentrating principally on American artists of the 1960’s and 70’s. Her present collection comprises of between 300 to 350 paintings and sculptures, making her one of the unrivaled power players in the art world circuit. While this achievement was not premeditated – she calls herself an “accidental collector” – Paula’s hobby became an overriding passion, which has resulted in her being actively involved in Art Dubai as well as a council member of Serpentine Gallery, London and VIP guest at Frieze London, Art Basel and Venice Biennale.    “The two best parties are the Serpentine Gallery party in London as well as Byrd Hoffman’s Watermill’s Gala in the Hamptons each summer”, she confides.

While the social scene is a by-product of a collector’s life, it is not a raison d’etre for Sheikha Paula, whose extensive knowledge is immediately apparent, even from a just brief meeting. She has been given paintings as gifts by many artists who become her friends, and she enjoys enviable access to their studios, such that many other collectors would relish.

For instance one of her latest acquisitions is a painting by the late American-Dutch abstract expressionist Willem De Kooning, whose studio Paula was shown by his daughter, following a serendipitous meeting. Then there’s the constant quest to understand more about certain genres and eras. She recently paid a private visit to India with the Serpentine Gallery to better understand the art scene there. “I met a lot Indian art collectors who all had Indian art in their homes because they understood it or it resonated with their culture” she says.

Her own approach to art is intuitive rather than investment-driven, which is something that Sheikha Paula strives to encourage in the young generation. ” Young people need to train their eye as well as study and read as much as possible as art will enhance their life forever! I always tell them to look, look, look !”  As a grandmother of eight, it’s philosophy she puts into practice on a daily basis, “My own home is loaded by books as I beleive the more you know, the more you appreciate”. Her children and grandchildren have had a head start thanks to the myriad of modern masters which hang in a family palace in Kuwait. A Pablo Picasso fountain is a focal point of the garden while works by Andy Warhol, Ahmed Al Soudani, Sara Rahbar, Parviz Tanavoli, Patricia Millns, Youssef Nabil, Farhad Moshiri, Zaha Hadid, Tom Dixon, Bruno Zapan and many others are juxtaposed with antique and modern furniture in a refreshing welcoming environment.

This article was published in HARPER’s BAZAAR , March 2011. Works an styling by Penny McCormick. Photography by Lester Ali. © Copyright

We decide to publish this article, because we continue to receive  the letters from our readers, who were not able to find Harper’s Bazaar Arabia  in Kuwait (March, 2011)  and who would like to read an archival copy.