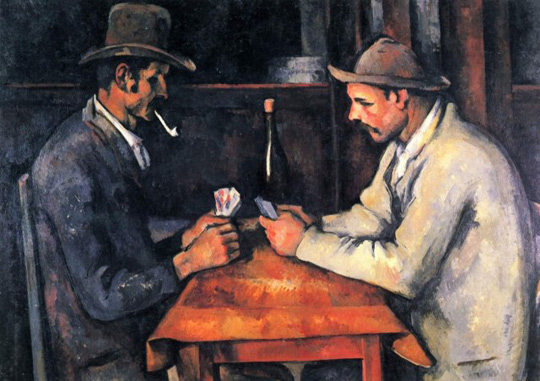 Qatar has purchased a Paul Cézanne painting, The Card Players, for more than $250 million. The deal, in a single stroke, sets the highest price ever paid for a work of art and upends the modern art market.

If the price seems insane, it may well be, since it more than doubles the current auction record for a work of art. And this is no epic van Gogh landscape or Vermeer portrait, but an angular, moody representation of two Aix-en-Provence peasants in a card game. But, for its $250 million, Qatar gets more than a post-Impressionist masterpiece; it wins entry into an exclusive club. There are four other Cézanne Card Players in the series; and they are in the collections of the Metropolitan Museum of Art, the Musée d’Orsay, the Courtauld, and the Barnes Foundation. For a nation in the midst of building a museum empire, it’s instant cred.

Is the painting, created at the cusp of the 20th century, worth it? Well, Cézanne inspired Cubism and presaged abstract art, and Picasso called him “the father of us all.” That said, “$250 million is a fortune,” notes Victor Wiener, the fine-art appraiser called in by Lloyd’s of London when Steve Wynn put his elbow through a Picasso, in 2006. “But you take any art-history course, and a Card Players is likely in it. It’s a major, major image.” For months, he said, “its sale has been rumored. Now, everyone will use this price as a point of departure: it changes the whole art-market structure.”

Read full article: Vanity Fair – Qatar Purchases Cézanne’s The Card Players for More Than $250 Million, Highest Price Ever for a Work of Art

Mathaf: Arab Museum of Modern Art in Qatar – Exhibitio...
6,500 pieces of modern arab art in Mathaf, Qatar
Artistic Treasures of the Islamic World in March, Doha by So...