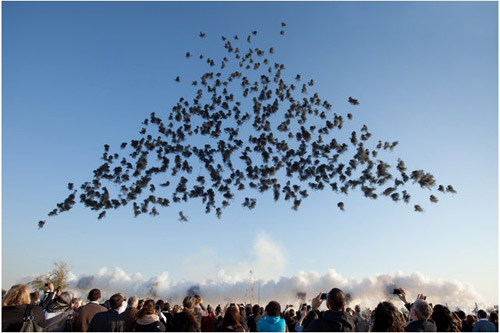 The Cai Guo-Qiang exhibition at the Arab Museum of Modern Art opened in December with ''Black Ceremony,'' a controlled explosion of fireworks that produced various scenes, above.Copyright 2012 The New York Times Company

“Investing millions in art venues and art work isn’t enough,” said Ninar Esber, a Lebanese artist represented by the Anne de Villepoix Gallery of Paris. What is missing, she said, are the basics, like freedom of speech. The art scene “is an empty golden shell,” she said, adding, “It glitters from the outside, but from the inside, it is empty.”

Critics of the Qatar royal family say it is behaving as a facilitator of the international art scene while at the same time using it for self-promotion. And rather than letting the art scene in Qatar grow naturally according to the needs of its people to express themselves, these observers say, the country is handpicking artists who are politically neutral.

In such an atmosphere, most local artists do not stand much of a chance.

“It’s hard to survive as an artist in a world where all that’s important is fame and image,” said a Bahraini contemporary artist who declined to be named for fear of being deported. “And I am not the only one who has come back without a lead. It’s the way it is in Qatar now.”

“There is no freedom of expression in Qatar and yet there is so much to be disclosed about its problems and injustices,” he added. “As an artist I should be able to share my views on these through my work.”

Artistic Treasures of the Islamic World in March, Doha by So...
The Most Expensive Painting Ever $250m Bought by Qatari Roya...
Mathaf: Arab Museum of Modern Art in Doha