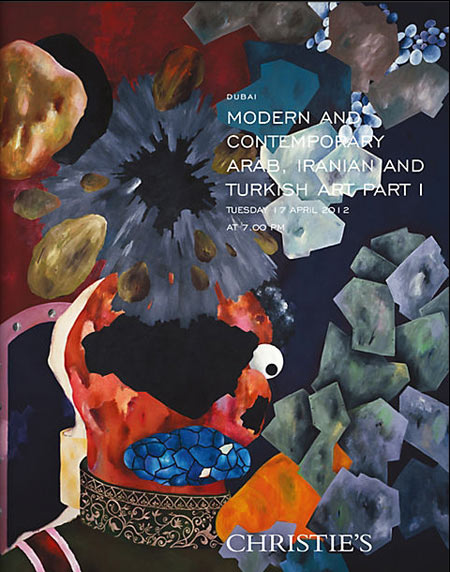 Early highlights consigned for this spring’s Modern and Contemporary Arab, Iranian and Turkish Art sale at Christie’s in Dubai on April 17th and 18th, 2012 will include works by Louay Kayyali, Paul Guiragossian and Nasrollah Afjehei. The sale is sponsored by Zurich, who recently signed a three-year contract to be the sole sponsor of the bi-annual Christie’s Dubai sales, and will be held at the Emirates Towers Hotel in Dubai with pre-sale viewing from the Sunday prior to the sale.

Michael Jeha, Managing Director of Christie’s Middle East and specialist in charge of the sale, said: “It is always very encouraging to have a strong selection of works already consigned so far in advance of the sale and we look forward to adding other important works over the coming months prior to the April sale.”

The highlight of the sale is a beautiful calligraphic work by the highly respected and internationally known Iranian artist Nasrollah Afjehei (b.1933). Entitled Wave, the large-scale canvas (measuring 2 metres square) depicts the movement and energy of the crashing wave through the tightly-written words which expand and contract in parallel ‘strands’ gently curving to simulate the curve of the wave. It was painted in 2010 and is estimated at $80,000-120,000. 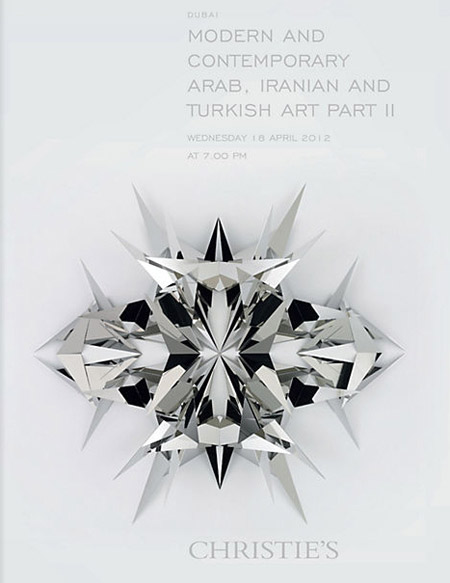 Painted in the same year by the female Iranian artist Azra Aghighi Bakhshayesh (b. 1968) is Ringlet, an oil on canvas. This calligraphic piece is dominated by a confection of interlocking symbols across the top three quarters of the canvas while the bottom section remains empty and black, (estimate: $10,000-15,000).

From the Syrian modern master Louay Kayyali (1934-1978) is a figure of an Old Man painted with oil on masonite, a type of hardboard. The texture of the wood chips clearly visible beneath the surface of the paint, the composition shows an old man slumped in the corner with his head in his hands, (estimate: $50,000-70,000).

The Newspaper Seller by the Syrian artist Saad Yagan (b.1954) shows the abstract news vendors hands embracing a collection of broadsheets, his face shown full on and then again in profile against a blue background, (estimate: $6,000-8,000). The newspapers he is selling represent a cross-section of publications with their varying social and political views. This is the first time that the artist has been included in the sale and is an interesting juxtaposition to the work of Kayyali above. Yagan represents the next generation of Syrian artists and was also from the city of Aleppo. Both the work by Kayyali and Yagan represent portraits of people at the margins of society.

962, showing two figures embracing, the muted pastel colours of the oil scratched with lines which give depth to the seated group. It is a much smaller work than the majority of pieces by the artist and unique as it shows such an intimate moment between the loving couple from an artist best known for his large scale works of groups of people with a more common focus on the relationship between mother and child. It is estimated at $20,000-30,000.

Atef Ahmed (Egyptian, b. 1969) shows two contrasting views of women. Untitled (Niqab and Hend) has the figure on the left in a tightly fitted dress and provocative pose beside another hidden beneath her abaya and is estimated at $12,000-18,000.