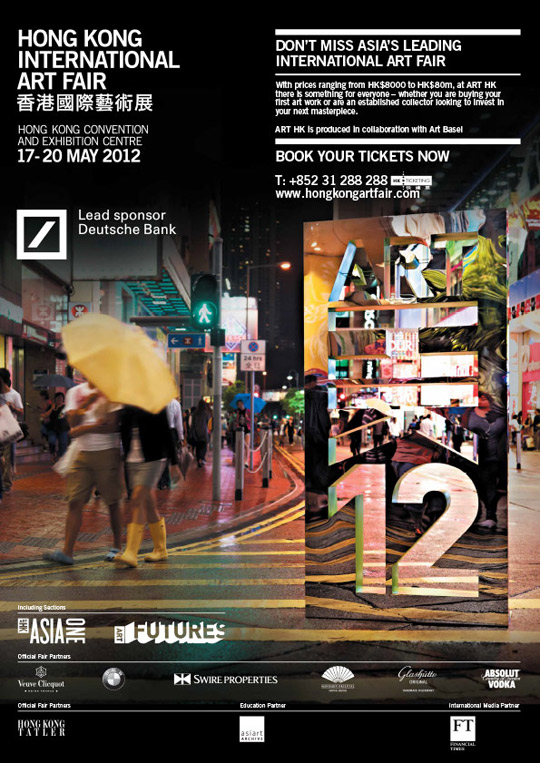 Back for its fifth year, ART HK 12 – Hong Kong International Art Fair takes place from 17-20 May 2012 at the Hong Kong Convention and Exhibition Centre (HKCEC).

ART HK is the leading art fair in Asia and a key fixture on the international art calendar. In 2011 ART HK welcomed 260 of the world’s leading galleries from 38 countries and brought an attendance of 63,000 (up 38% on 2010). With more billionaires in Asia than in Europe, the art world recognizes the significant market potential in the region, and the role ART HK plays in accessing that potential.

Hong Kong is in the midst of all the excitement that a cultural emergence brings. With the development of the US$2.1 billion West Kowloon Cultural District and its contemporary museum component, M+ (first phase scheduled to open in 2016), the renovation of the Central Police Station heritage site to a mid-size exhibition venue (scheduled to open in 2014) and the opening of the Asia Society’s new premises in Hong Kong in early 2012, the city will shortly be home to world class cultural and exhibition venues. This, added to the significant work already conducted by organizations such as Para/Site Art Space, Asia Art Archive and Fotan Open Studios, provides breadth to the non-commercial aspect of the cultural scene in Hong Kong.

Widely acknowledged as an important platform for networking in the international art community, ART HK brings together collectors, curators, artists and galleries from across Asia and the rest of the world. Collectors are drawn by an opportunity to discover a quality and geographical diversity of art not presented anywhere else. The Fair is accompanied by a packed VIP program of events showcasing the best that Hong Kong has to offer culturally as well as socially, and an extensive talks program featuring a world class line-up of speakers organized by the estimable Asia Art Archive.

The city plays host to an important art market. Hong Kong is the third largest auction market in the world after New York and London, and China (including Hong Kong) has recently overtaken the United Kingdom to become the second most important auction market for art and antiques. The arrival of major international galleries including Gagosian Gallery (2011) and White Cube (spring 2012) has strengthened an already vibrant gallery scene in Hong Kong.

With its longstanding reputation as the gateway between east and west, its geographical location at the heart of Asia and its status as the financial centre of Asia the city enjoys unparalleled advantages over other locations in the region and provides a natural location for an international hub fair in Asia. With its shared history with the west, Hong Kong is a place where people from all parts of the world feel equally at home. English is commonly spoken and there are world class hotels, restaurants and shopping all set before Hong Kong’s glittering skyline.