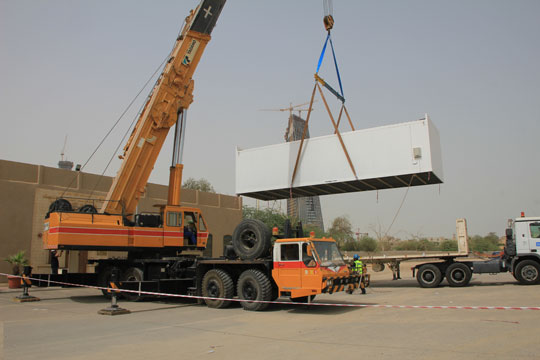 Museum of Modern Art in Kuwait is preparing unprecedental performance of 2 projects MoMRtA + Unplified to be opened on 22nd of May, 2012 at 7pm.

UNPLIFIED is a sound installation by Lebanese artist Tarek Atoui, living in Paris and we had a pleasure to meet him yesterday and speak about his visit to Kuwait and about his upcoming show. 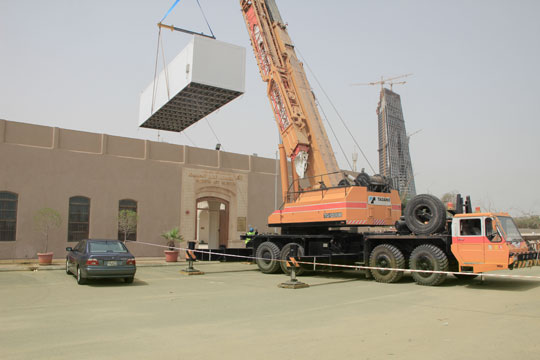 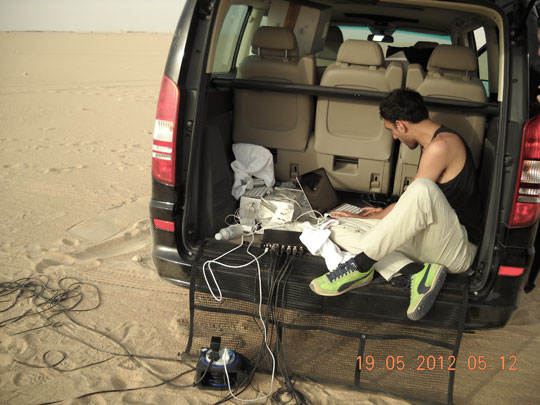 Tarek Atoui. Image is a courtesy of MinRASY PROJECTS.

This work is a commissioned work specifically for Kuwait, and this show at the Museum of Modern Art, Kuwait. How did this happen?

TA: In March 2010, Rana (Sadik) approached me with the idea of interpreting Men in the Sun in a contemporary context. Rana heard the sounds of the book, sonic sounds, she heard the heat and the dust and the desperation. I guess its because she is a product of Kanafani’s environment, that to hear the story line did not dominate her consciousness while reading the novella, the sounds did. Just a quick side note: Men in The Sun, is written by a Palestinian author who lived in Kuwait, its about Palestinian refugees in Lebanon who pay a driver to smuggle them into Kuwait via Basra inside his empty water tanker. Its evident that they would meet their fate, before they reach Kuwait, the firdous, paradise they were seeking. Kanafani leaves you with the question of why didn’t these men call for help when they were dying in the water tank?. My first visit to Kuwait to do research was in December 2011. I took the same route as the characters in a water tanker!

I was recording sounds, collecting sound elements. What struck me first was that visually the desert changed, it was more urbanised and populated than the sparse desert that Kanafani described. The desert had developed a new identity. Only when I closed me eyes did I experience the desert. I felt scared when my voice was not coming back, the desert has no echo, its qualities are like its personality, it swallows everything. To me the characters probably cried for help, but the desert swallowed the sounds, it unplified them. It made them quieter. This was my point of departure for the work Unplified.
I prolonged the questions posed by Kanafani, did the desert sound qualities seal the fate of the men?: Can we amplify the non-amplfied, can we bring back swallowed sound? I wanted to examine these possibilities.

My reading of Kanafani’s work, is about the human condition, its about refugees and illegal immigrants, its about desperation for life, and so for me in relation to what I do, bringing back sound is part of restoring the collective history of Palestinian people. We usually think of restoring written documents, properties, memory, using the work Men in the Sun, making the journey to Kuwait, I am restoring sound.
I left to my studio in Paris and began to work on this production.In Paris, I started to build a device to do audio feedback. The device is a computer software for microphones to capture the ambient sound of a space and amplify its sonic and acoustic properties. So basically this device takes the sounds in desert, amplifies it and plays it back in a space. I examine if I can make desert hear itself, think for itself. 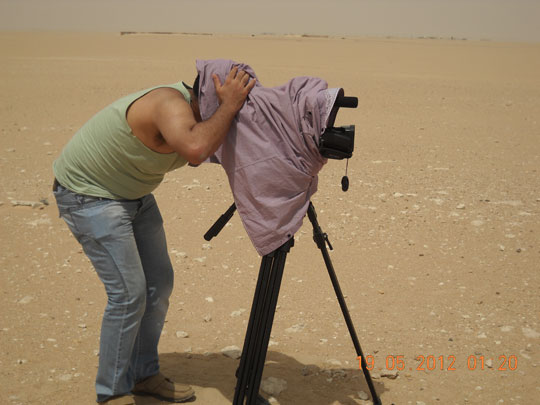 These pictures of your trip yesterday are great! Tell me what

TA: What an experience. Its mid May and the temperatures were soaring at 57 degrees. We: a driver, my host, a guide, a photographer and I went away 8 km from the main road, we were in the Shigayah area which is 70km north of Kuwait City, the museum where we are at now.
This was vital in order to get away from elements we know, in order to reach a space of voidness and vastness.
We set of at 7am and by 11am , the heat was unbearable, 57 Degrees! . The recording went on for 6 hours non-stop. The equipment was not coping, the heat was just pounding man and machine! and time passes very slowly in the heat. I needed to continue through sunset. Its really only when I experienced these conditions did I empathise with the characters.

The sound experiments done during the daylight hours were good. But then when the heat started to subside, I unplugged everything and started to do it over. At around 4 pm we restarted everything, playing my system in relation to the desert, and with the desert and calibrating the sound and suddenly the sounds were like a symphony that played with the wind. I entered a dialogue with the desert, that i didn’t expect. It took the pounding heat the to reach this point.
The result is : noisy, windy, its distorting, to me its what I experienced. Each speaker becomes a character, a different voice, a different story channelled and and figured by wind, but orchestrated by me, I’m playing with the desert. This work is what will be installed in this portacabin. 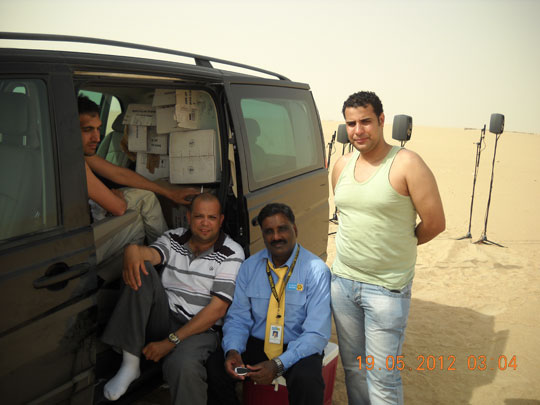 Would you do this again?

TA: What happened yesterday is impossible to repeat, but I would do it again. The peak heat was essential to my work. Like jazz, saturation and culmination of events and heat was essential to reach a point and condition of meta-state of listening, awareness and consciousness. Unforgettable!

Is this work, too cerebral and intellectual, and difficult to engage with?

TA: It does have a conceptual approach. If one listens to the sound without being apprehensive about art, and just taking in the sounds, the piece still works. The power of abstract art is to allow room for people to take what they want to take out of it.
You decide with your instinct and intuition, if its sincere. For me personally, as a sound artist this piece took me somewhere, it moved me. I didn’t start this project with this work result, but I adapted to the desert as I worked in it.

This interview was done with sound Artist Tarek Atoui, May 20, 2012 at the Museum of Modern Art Kuwait, where his work will be exhibited, opening May 22- June 11. More details