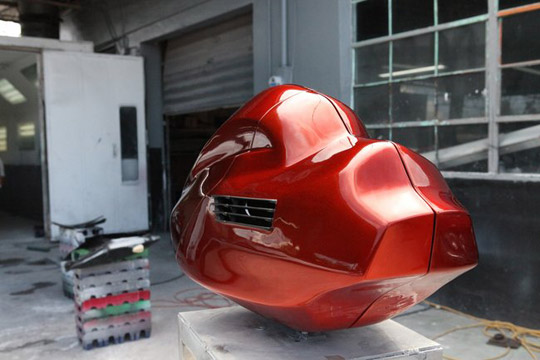 An artwork by Shadi Habib Allah, ”S/N: 8F1GNA0021,” is showing at the Basel art fair, with the Green Art Gallery of Dubai. @NYTimes

This year, for the first time among the nearly 300 galleries fine-tuning their last-minute preparations for Art Basel, there are two galleries from the Gulf region: Green Art Gallery and Gallery Isabelle van den Eynde.

The inclusion of the galleries, both from Dubai, has signaled for many a sign of the maturation of the Middle Eastern art scene and its increasing global presence. “The fact that you have two galleries from the U.A.E. points to the growth of the region in terms of its artists, galleries, institutions and private collectors,” said Marc Spiegler, co-director of Art Basel, which opens Thursday and runs through June 17.

The region’s scene began to rise with the first edition of Art Dubai in 2006 and accelerated with the openings in Doha of the Museum of Islamic Art in 2008 and the Mathaf: Arab Museum of Modern Art in 2010.

Green Art Gallery and Gallery Isabelle van den Eynde are exhibiting in Art Statements, a sector for emerging talent that has catapulted artists like William Kentridge, Takashi Murakami and Elizabeth Peyton to international acclaim. Galleries in this section are selected by the Art Basel committee based on the strength of a proposed project featuring a single artist.

“Any gallery wants to end up in Basel because, like it or not, this is the best fair in the world,” said Yasmin Atassi, the director of Green Art Gallery.