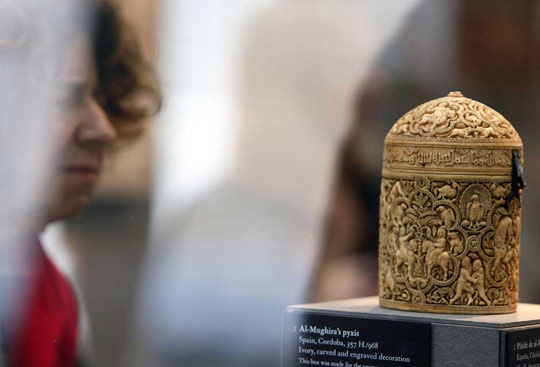 A woman examines a box entitled “Al-Mughira’s pyxis” from Spain on September 17, 2012 in Paris, during a press visit of the new Department of Islamic Arts at the Louvre, the largest of its kind in Europe, with 3,000 artefacts on display, gathered from Spain to India and dating back to the seventh century AD. Intended to celebrate “The Radiant Face of a Great Civilization” the 100-million-euro project – largely financed by donors from across the Islamic world – will be inaugurated by French President ahead of its official opening on September 18. AFP PHOTO / KENZO. © artdaily.org

The creation of a new wing dedicated to Islamic art at the Louvre represents a decisive phase in the architectural history of the palace and in the development of the museum. The design and installation of these new galleries is the museum’s single largest expansion project since I. M. Pei created the now-famous Pyramid twenty years ago.

The new department will soon be home to one of the most exceptional collections of Islamic art in the world, owing to its geographic diversity, the historical periods covered, and the wide variety of materials and techniques represented.

This unprecedented project grew out of one of the first observations made by Henri Loyrette upon his appointment as the Louvre’s president and director in 2001: the museum’s collection of Islamic art, due to its existence as a mere section of the Department of Near Eastern Antiquities, lacked sufficient space to reveal the full measure of its wondrous treasures to the public.

The very name given to this new wing Department of Islamic Art is in keeping with an approach that the Louvre intends to embrace to its full extent. The objective is to present the luminous aspects of a civilization, its impact on a richly varied humanity, by way of a broad and inclusive panorama presenting very different cultures (Andalusian, Mamluk, Ottoman, Persian, etc.). More than merely inviting visitors to view a succession of works, the aim is to take them on a genuine journey of the senses to the heart of Islamic civilization. To this end, the plan for the new galleries incorporates a substantial outreach component conveyed in particular through a set of tools and resources designed to help visitors contextualize the works on display, situate works historically and geographically, decipher motifs and figures, and even test their own conclusions against those of specialists.

The building of this new wing at the Louvre dedicated to Islamic art has been made possible through the generous support of the museum’s exceptional sponsors and donors. Our first and main sponsor, actively involved from the project’s very inception, is His Royal Highness Prince Alwaleed bin Talal bin Abdulaziz al-Saud, who was the guest of honor at the ground-breaking ceremony in July 2008. Several national governments subsequently signed on to lend their support to this major project: His Majesty King Mohammed VI of Morocco, His Highness Sheikh Sabah al-Ahmed al-Jaber al-Sabah, Emir of Kuwait, in the name of the State of Kuwait, His Majesty Sultan Qaboos bin Said al-Said, Sultan of Oman, and the Omani people, and the Republic of Azerbaijan.