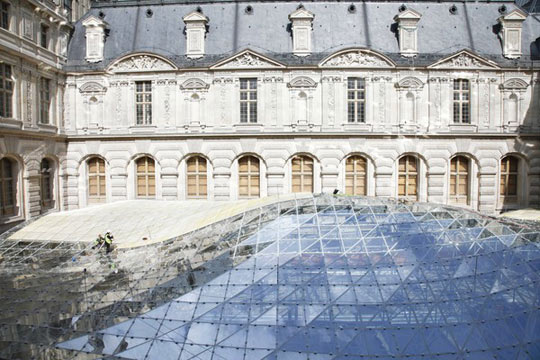 The Louvre’s astonishing new wing for the department of Islamic art undulates like molten gold, so liquid-smooth in contrast to the surrounding neoclassical architecture framing it that at a glance from afar it almost looks like a digitalized, fake rendering of what visitors can hope to see in the distant future.

For the museum’s enlarged, 18,000-piece treasure trove of Islamic art, opening Sept. 22, architects Mario Bellini from Italy and Rudy Ricciotti from France used the latest in computer technology to create what is the most significant, innovative architectural expansion project to the museum since I.M. Pei shook up the institution with his glass pyramid in 1989.

A role for the Louvre as a kind of goodwill ambassador for Islam through the arts is a complex and ambitious one in this strictly secular country, with the largest Muslim population in Western Europe and strategic ties to Islamic countries — a few of which have provided much of the funding for the project, including Saudi Prince Waleed bin Talal’s Alwaleed Bin Talal Foundation; King Mohammed VI of Morocco; Sheikh Sabah al Ahmed al Jabbar al Sabah, the emir of Kuwait; Kaboos ibn Said, sultan of Oman; and the republic of Azerbaijan).

When Saudi Prince Talal donated $20 million to the project, he said: “Relations between Europe and the Islamic world are going through a turbulent period.” The new wing “will assist in the understanding of the true meaning of Islam, a religion of humanity, forgiveness and acceptance of other cultures.”