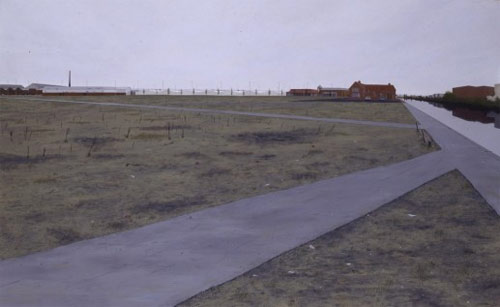 David Rayson, from Ashmore Park to Wednesfield : The Jet Bench 1998 © The Artist

The British Council, Contemporary Art Platform and the National Council for Culture Arts and Letters

invite you to a talk by David Rayson

on the 18th of September at 7pm at The Museum of Modern Art, Kuwait.

In parallel to the Out of Britain exhibition (18 September – 25 October 2012), the British Council in collaboration with CAP Kuwait, will host Landscapes Expanded; a programme of events and lectures that will explore the themes of landscape in different art forms.
David Rayson, featured artist in Out of Britain, will be the first to present a lecture about his work. Rayson’s work relates directly to the visual potential of the everyday, enabling the ordinary to be realised as fantastic.

David Rayson was appointed professor and head of Painting at the Royal College of Art in 2006. He is a practising artist, tutor and curator and his work has been exhibited widely in the UK and internationally. His work is included in major collections including the Tate, Whitechapel Art Gallery, British Council, Deutsche Bank, Rubell Family Collection and Contemporary Art Society.