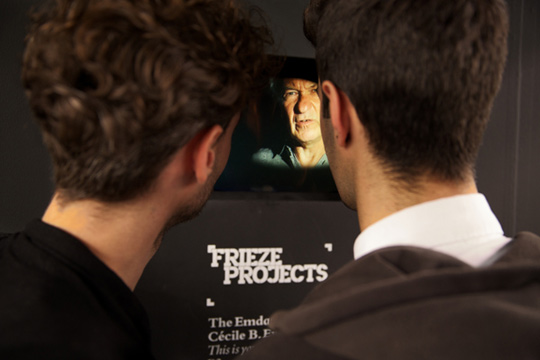 Cécile B. Evans, Emdash Award Recipient 2012, “This Is Your Audio Guide,” 2012. Photograph by Polly Braden. Courtesy of Polly Braden/ Frieze.

The Emdash Award 2013 is now open for entries. The Emdash Award returns to Frieze London for the third consecutive year in 2013 as part of the acclaimed Frieze Projects programme. The award is open to artists living outside of the UK, up to five years from graduating from an undergraduate or postgraduate degree or under 35 years of age. Frieze Projects is a programme of site-specific commisions shown at Frieze London each year. Produced by Frieze Foundation, the Emdash Award is supported by the Emdash Foundation and presented in collaboration with Gasworks.

The recipient of the award will have the unique opportunity to present their work at Frieze London 2013 to a significant international audience. Additionally, the prize will cover production costs of up to 10,000 GBP, an artist’s fee, per diems, travel expenses and a studio residency at Gasworks in London from August to October 2013.

Entrance to the award is by open submission and the winner will be selected by an international panel of artists and curators. The closing date for applications is 16 January 2013. The winner of the award will be announced in May 2013.

Proposals for work can take the form of site-specific installations; performance; film; video or print work. Applicants will be judged on the innovative nature of their proposal and its suitability for realisation at Frieze London.

The Emdash Award winner in 2012 was Cécile B. Evans, whose work This Is Your Audio Guide was launched at Frieze Art Fair 2012 to significant critical acclaim.