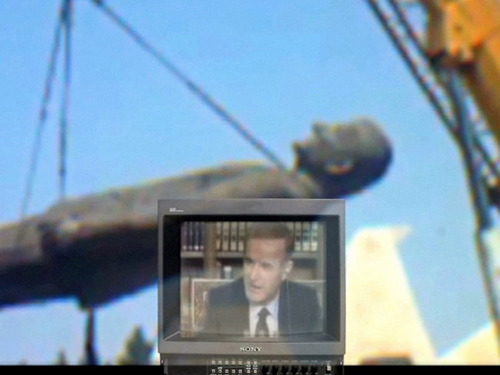 The programmers say they’re trying to show that there’s a conversation going on across geography and generations that may or may not have taken place in reality, Ms. Salti said by phone from Beirut. As an example, she cited the echoes between a 1968 Algerian film and the current work of the Palestinian filmmaker Elia Suleiman, even though “I know for sure that a) he’s never seen the Algerian film and b) never met the director.” She added, “And yet they have a shared history and sensibility and kinship across time and space.”

To that end Mapping Subjectivity includes older films like the landmark Egyptian work “My Wife and the Dog” (1971) from the director Said Marzouk, who defied Arabic movie convention on depictions of sex with a tale of a jealous lighthouse keeper tortured by the memories of his own philandering youth, and “Sun of the Hyenas” (1977), a scathing critique of international tourism made at a time when the director Ridha Behi’s native Tunisia was highly dependent on tourist dollars. Female filmmakers — including Assia Djebar (“La Nouba,” a 1977 Algerian film) and the visual artist Simone Fattal (“Autoportrait,” a Lebanese-French film completed this year) — are represented as well.

As Ms. Jensen pointed out, it’s not as if Middle Eastern cinema isn’t renowned. Commercial Egyptian and Syrian pictures traveled widely in the ’60s, ’70s and ’80s, and many of the region’s filmmakers were trained at such film schools as VGIK in Moscow. During the same period even off-the-grid directors were able to get their movies made, although their films were often censored or banned.

Read full article NYTimes: The Past Is Always Present, Even Uninvited