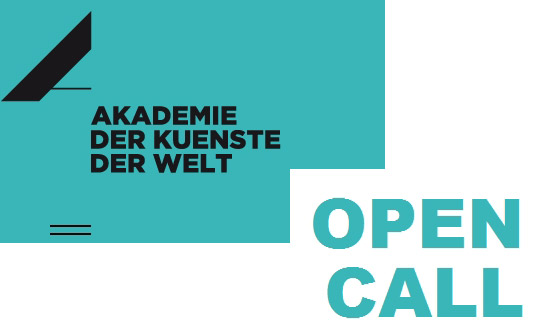 Call for submissions to artists, artist groups, theorists, curators and other cultural producers

The Academy of the Arts of the World is a unique, Cologne-based institution founded in 2012 with the aim of fostering inter- and transcultural dialogue between the arts.

As a dynamic and interdisciplinary, albeit non-curricular platform, the Academy engages with issues of contemporary global culture and politics such as the trans-border movement of people, aesthetic responsibility, hospitality, non-Western, pre-modern art, concepts and practices. Bridging local and global perspectives, the Academy sets out to initiate critical debate and to create spaces of possibility for diverse aesthetic communities.

An important part of the Academy’s mission is providing grants to projects by individuals or groups. This is the second call for applications issued by the Academy—the deadline of which is March 20, 2013.

Submissions
– Local and international artists, artist groups, theorists, curators and cultural producers are invited to submit a project.
– Institutional initiatives are also encouraged to submit proposals, bearing in mind that the Academy only supports art production costs.
– The submitted project should address issues consistent with the Academy’s profile (e.g. inter-/transcultural issues, migration, nomadic practises, hospitality, responsibility, non-Western and pre-modern art, concepts and practices).
– The project must be presented or produced in Cologne.
– The deadline for application submission is March 20, 2013.
– The submitted project should be realised by December 2014.
– The average grant awarded is EUR 20 000, the maximum grant awarded being EUR 40 000.

Jury
The jury consists of members of the Academy of the Arts of the World. The jury will award grants to around ten projects on the basis of the applications received.

The application submission should include the following:
– A project synopsis, including a short project motivation (no more than 500 words).
– A longer description of the project’s thematic conception (no more than 1 500 words).
– A list and short narrative biographies of each main participant.
– Support material such as work samples or media files (max. 25 MB) may be submitted.
– A budget that also lists the applicant’s own contribution and all additional funding by third parties.
– Timeline of research, pre-production and production.
– All applications should be in English.

Applications must be submitted electronically to the following email address (attachments size up to 25 MB): pm(at)academycologne.org