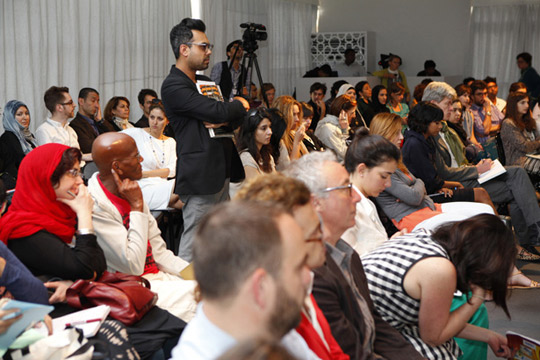 The Global Art Forum was launched by Art Dubai at its inaugural fair in 2007. Bringing together protagonists from the art world and beyond for a week of talk and performance, the Forum has become known as a particularly innovative platform, with an emphasis on issues prevalent in the Middle East and Asia. The Global Art Forum is presented by the Dubai Culture and Arts Authority (Dubai Culture), and is held in partnership with Mathaf: Arab Museum of Modern Art (Qatar Museums Authority).

In 2013, the programme is directed by Istanbul-based writer/editor HG Masters, and commissioned by writer/curator Shumon Basar. Titled IT MEANS THIS, the forum explores the concept of definitionism: investigating the words, terms, clichés and misunderstandings that proliferate in the art world and beyond. The Forum attempts to (re)define words, phrases and ideas we think we know, and those we need to know, to navigate the 21st century.

Each session or element of the Forum takes on a keyword; some are terms we use every day—such as Heritage, Biography, Freezone, Score and Place (looking particularly at how the cities Lagos and Ramallah having been shaped by writers and artists). Other terms may be less familiar—including Academese, Advert Adverts, Drone Fiction, MENA (Middle East Nervous Anxiety), or Neologism. The eclectic lineup of Forum contributors are set to pick apart these terms through talks, debates, performances, TV clips, new publications, films, music, long-term research projects, and so much more.

Other discussions at Art Dubai include Terrace Talks, a series of high-level one-on-one conversations between key protagonists from the arts scenes of the Middle East and Asia, each year focusing on particular themes and developments.