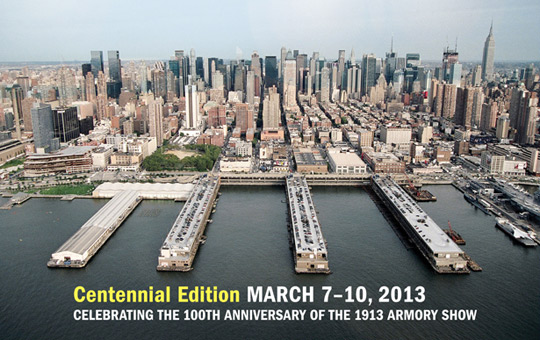 A hallmark of the international annual arts calendar, The Armory Show will present over 200 galleries from 30 countries at its fifteenth edition from March 7 to 10, 2013, bringing a range of new and historically significant works of art to New York City. This March, the fair is proud to be celebrating the centennial of our namesake, The Armory Show of 1913, widely credited with the introduction of modernism to the United States. In an effort to bring this rich history to light, the 2013 fair will honor this landmark exhibition through a variety of programming and cultural initiatives.

Armory Focus USA: For its fourth edition of Armory Focus, the curated section of the fair emphasizing the artistic achievements of a specific geographical region, The Armory Show will feature the United States of America. Under the curatorial vision of Eric Shiner, Director of The Andy Warhol Museum, Pittsburgh, Armory Focus: USA will present 17 established and emerging galleries. In a series of unusual juxtapositions, the work of artists both from within the United States and beyond will provide commentary on the current state of the union.

Liz Magic Laser: Known for her participatory and performative works, Liz Magic Laser was selected as the 2013 Armory Commissioned Artist. With gestures veering from comedic to politically provocative, she will activate the fair’s heritage as a site of innovation and discovery.

Armory Open Forum: This edition of the on-site series of conversations and panels is curated by Anne Barlow, Executive Director of Art in General. Two panels will focus on the legacy of 1913. Curator Rob Storr will moderate a discussion on the “myths and misconceptions” of 1913 featuring Marilyn Kushner, Francis Naumann, and Gail Stavitsky. Moderated by Jan Åman, panelists Carlos Basualdo, Daniel Birnbaum, Paul Chan, and Molly Nesbit will debate the significance of Marcel Duchamp’s “famous silence” and his rejection of the growing art market 100 years after his controversial participation in the 1913 Armory Show.

Cultural Partners: Leading up to and during the fair several cultural partners will host exhibitions relating to the 1913 Armory and the development of modernism. During the fair, the Museum of Modern Art will present Inventing Abstraction, 1910–1925 (December 23, 2012–April 15, 2013); The Metropolitan Museum of Art will exhibit African Art, New York, and the Avant-Garde (November 27, 2012–April 14, 2013), displaying African artifacts acquired by New York’s artistic community during the 1910s and 1920s; and the Montclair Art Museum will show The New Spirit: American Art in the Armory Show, 1913 (February 17–June 16, 2013). In October 2013, The New-York Historical Society will host The Armory Show at 100, featuring such canonical works as Duchamp’s Nude Descending a Staircase, first viewed on American soil at The Armory Show of 1913.