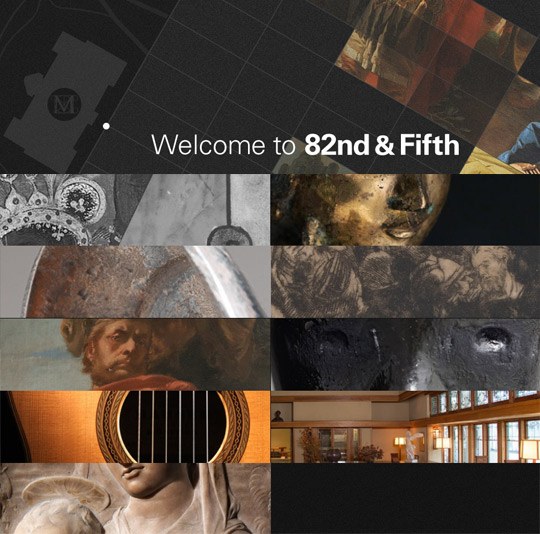 The Metropolitan Museum of Art launched today a new web series, 82nd & Fifth, in which 100 curators from across the Museum talk about 100 works of art from the Met’s collection that changed the way they see the world—one work, one curator, two minutes at a time. Eleven Museum photographers interpret the curators’ audio commentaries visually.

82nd & Fifth is the Met’s address in New York City and also an intersection of art and ideas. Each episode includes “Watch,” a two-minute audio and visual essay with a curator and a work of art he or she finds transformative; and “Explore,” an interactive feature that invites the visitor to get closer to the work of art on his or her own.

Thomas P. Campbell, Director and CEO of The Metropolitan Museum of Art, said: “82nd & Fifth is a project that speaks directly to my interest in using the Met’s collection to link historical art and culture to the real world. In a sea of constant information, these two-minute, authoritative commentaries are a welcome way to get powerful and compelling content in quick doses. We hope they will intrigue audiences who love the Met and those who are new to art.”

82nd & Fifth builds on a series of award-winning Metropolitan Museum online initiatives inspired by the Museum’s vast collection. The Heilbrunn Timeline of Art History, launched in 2000, continues to evolve and expand, and receives more than one million visits per month. Connections (2011) offers personal perspectives on works of art from the collection by 100 Met staff members. 82nd & Fifth is the third installment in this trilogy of signature collection-inspired Metropolitan Museum online features.

At launch on January 31, 2013, six episodes were posted online and will be followed by two episodes weekly—every Wednesday at 11:00 a.m.—through December 25.

The inaugural episodes are:
* Faith by Luke Syson, the Iris and B. Gerald Cantor Curator in Charge of the Department of European Sculpture and Decorative Art, on Antonio Rossellino’s Madonna and Child with Angels;
* by Amelia Peck, the Marica F. Vilcek Curator of American Decorative Arts, on Frank Lloyd Wright’s Little House Living Room;
* String Theory by Jayson Kerr Dobney, Associate Curator and Administrator, Department of Musical Instruments, on a guitar created by Hermann Hauser for Andrès Segovia;
* Prime of Life by Alisa LaGamma, Curator of African Art, on a Fang female reliquary;
* Winners and Losers by Xavier Salomon, Curator of Italian Paintings, on Giovanni Battista Tiepolo’s The Triumph of Marius; and
* Altered States by Nadine Orenstein, Curator of Northern European Prints, on Rembrandt’s Christ Crucified between the Two Thieves: The Three Crosses.

Visitors can sign up to receive email reminders each Wednesday morning, when new episodes are posted.

82nd & Fifth is produced by the Digital Media Department in collaboration with The Photograph Studio and curatorial staff of The Metropolitan Museum of Art. Web design and development is by CHIPS, and original music by Sonic Highway.