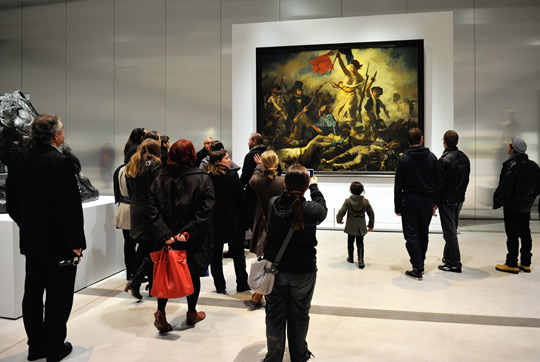 A file picture taken on December 3, 2012 at the Louvre-Lens Museum in the French northern city of Lens, shows a visitor passing by the Eugene Delacroix masterpiece “La Liberté guidant le Peuple” (Liberty leading the people). A woman vandalized on February 7, 2013 “La liberte guidant le peuple”, because she wrote “AE911” with a black permanent marker on the painting. AFP PHOTO/ PHILIPPE HUGUEN. Copyright © artdaily.org

One of the most iconic paintings in French history, Delacroix’s “Liberty Leading the People”, was defaced by a woman with psychiatric problems but escaped permanent damage.

The 28-year-old woman, who was being held by police Friday, is accused of using a black marker to deface the masterpiece at a recently opened satellite branch of the Louvre in Lens, northern France. Her motives were unclear but her scrawling of “AE911” had some wondering if she was suffering from delusions involving the 9/11 attacks.

“We are leaning towards hospitalising her immediately in a psychiatric facility given that the psychiatrist appointed by the prosecutors concluded that she is not criminally responsible,” said local prosecutor Philippe Peyroux.

The woman defaced the painting on Thursday before being apprehended by a security guard with the help of another visitor. She was to appear before a judge on Saturday and prosecutors had ordered a psychiatric evaluation.

The Louvre said the painting suffered no long-term damage and that specialists were able to “completely remove” the approximately 30-centimetre (12-inch) mark on the bottom right of the painting. “The integrity of the work has not been affected, as the inscription was superficial and remained on the varnished surface without reaching the layer of paint,” the Louvre said in a statement. The painting by Eugene Delacroix commemorates France’s July Revolution of 1830. It shows a bare-breasted woman personifying Liberty leading the people forward over the bodies of the fallen, holding the French tricolour in one hand and a bayonetted musket in the other.

The wing housing the painting was closed Friday but expected to reopen Saturday. The woman would have faced up to seven years in prison and a 100,000 euro ($135,000) fine if found criminally responsible and convicted of defacing a cultural object. Lens mayor Guy Delcourt said the woman “told security, in a rather incoherent manner, that she wanted to put her mark” on the painting.

The “AE911” mark may indicate her involvement with the Architects & Engineers for 9/11 Truth (AE911Truth), a US group that supports a conspiracy theory that the World Trade Centre collapsed as the result of a controlled demolition. Prosecutors did not release the woman’s identity, but said she was unemployed, had a master’s degree and did not have a previous criminal record.

The Louvre opened the new satellite branch in Lens — a former mining town plagued by high unemployment — in December in a bid to revive the region and boost tourism. Officials said security would be strengthened at the branch following the incident, with more guards expected to be posted.

In 2009 a woman threw a mug of tea at the Mona Lisa at the Louvre’s main branch in Paris but it bounced off the protective glass around the painting.

In December a Polish man was jailed for two years in Britain for defacing a mural by US artist Mark Rothko at London’s Tate Modern gallery.
By: Marie-Laure Michel © 1994-2013 Agence France-Presse