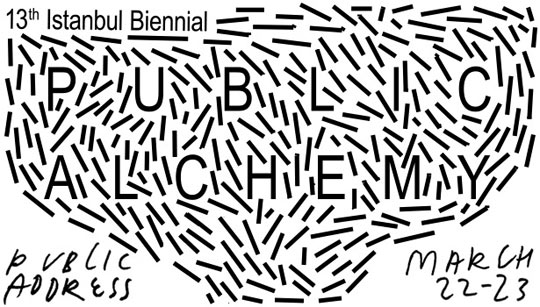 The 13th Istanbul Biennial Public Programme titled Public Alchemy examines the ways in which publicness can be reclaimed as an artistic and political tool in the context of global financial imperialism and local social fracture. From February to November 2013, a series of lectures, workshops, seminars, performances and poetry readings will examine how a political, poetic alchemy is at work, both in Turkey and across the world in which conventional concepts of ‘the public’ are being transformed.

Public Address – 22–23 March 2013
How are we addressed as citizens? What registers of address are used by politicians, professors and publishers to speak to us, what form does such address take and in which way does it flow? Do so-called new media techniques offer alternative devices of communication or do they sustain hierarchies of address, suggesting radical distribution but in fact maintaining power in the hands of the technologically enabled?

Questioning the relation between public speech and private power, the second cluster of events of the 13th Istanbul Biennial Public programme asks if it is possible to find and sustain spaces of freedom of speech in the context of a neo-liberalised public domain. In the context of calls for an ‘opening up’ of media rights in China, debates about the suppression of journalism in Turkey, and the rights of private citizens against multinational conglomerate media intrusion in the UK and USA, what other modes of speech can we imagine? If ‘to be addressed’ suggests a certain technique of power, a certain relationship between the addresser and the addressed, what different spaces of audibility might be practiced?

Public Address will include lectures, panels, performances and readings of Ahmet Güntan’s poems, and will take place on Friday 22 and Saturday 23 March.

Co-curated by: Fulya Erdemci and Andrea Phillips
Organised by: Istanbul Foundation for Culture and Arts