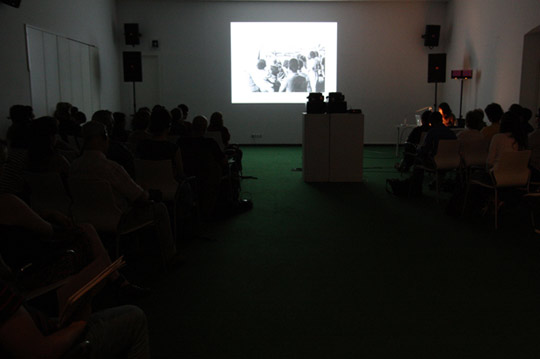 CA2M Centro de Arte Dos de Mayo will host  “Speculating on Change”  4 days workshop and symposium in 17-20 June, 2013
These days the semiotic control associated with cognitive capitalism have become part of the fabric of life in all its aspects. The internet age has, of course, opened up space for the collection and redistribution of knowledge, but to turn a profit from these new spaces, the knowledge economy must imperatively colonise the time of users. This globalised semiocapitalism thus reconfigures various cultural ethoses by subjecting them to uninterrupted information flows, thereby saturating users’ attention spans. In this context the self-entrepreneurial artist, combining independence, creativity, flexibility, and above all self-exploitation, has become a cultural “role model”—the perfect embodiment of the neo-liberal script that openly fantasises about a world of creative, competitive operators engaging in self-exploitation by speculating on potential symbolic added value.

The specific forms of positivism associated with populist cultural policies and art speculation pose a threat to the values of autonomy, opposition and radical negativity. Some artistic practices seek to transform the conditions of their alienation into productive resources in response to the widespread trend towards commodification and the precariat. Such artists strive to regain control over their time and over a form of sociability that escapes the temporality of capitalism by experimenting with what initially appear to be incompatible syntheses between original critical forms and financial autonomy.

This “productive alienation” throws the voices of the codes like a ventriloquist, appropriating the protocols of finance and trade. It draws on the social time and knowledge-sharing typical of self-organisation. It subtly plays with the agendas of other actors in the art field. Such “alienated art” develops an “economy of attention,” short-circuiting the official channels in the hope of re-routing missing people towards works that potentially meet their needs.

The artists, critics, and thinkers invited to speak at the 20th Jornadas will question the specificities of forms and protocols established by artists to renew the terms of criticism, thereby shaping the “community to come.”

Call:
Researchers’ projects in the fields of theory and artistic practice on the following topics are welcome “Productive forms of alienation,” “The economy of attention” and “The community to come,” the heart of the three-day programme of conferences and workshop.