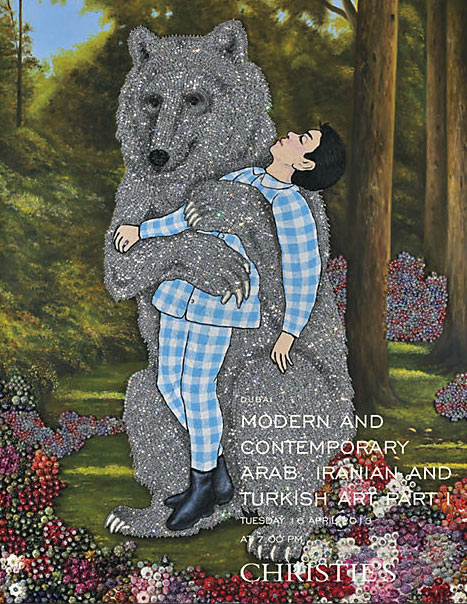 Christie’s is delighted to present a tight sale of exclusive art works by leading modern and contemporary artists from the region. Highlights include two unique pieces by Charles Hossein Zenderoudi, one that was once part of the Michel Tapie collection, the other coming from the Rodolphe Stadler collection. Furthermore, Le Chemin d’Alep by Chafic Abboud is another rare piece, being one of the two largest compositions painted by the artist in the last decade of his life. Other modern masterpieces feature outstanding works by Louay Kayyali, Paul Guiragossian and Parviz Tanavoli amongst others. The impressive composition made from crystals, acrylic cakes and beads, entitled Secret Garden is an iconic work by major Iranian artist Farhad Moshiri and takes the lead in the contemporary art works of the sale. Christie’s is also proud to feature two photographic works by Moroccan female artist Lalla Essaydi, from her new series, which are to be sold to benefit the artist’s upcoming monograph.

Hala Khayat, Christie’s Specialist and Head of Sale, commented: “It has been a busy few months leading up to the Spring sales and to have such a strong group of modern works is very encouraging. There are also works by established contemporary Arab, Iranian and Turkish artists, which complement the modern highlights of the Part I sale. The Part II sale brings together modern Arab and Iranian masters with the younger, cutting edge artists, several being offered at auction for the first time. The selection includes sculptures, works on paper, paintings and photographs with estimates from $3,000. This two-part combination will attract the interest of new collectors and be a match for the increasingly mature tastes of our existing clients.” 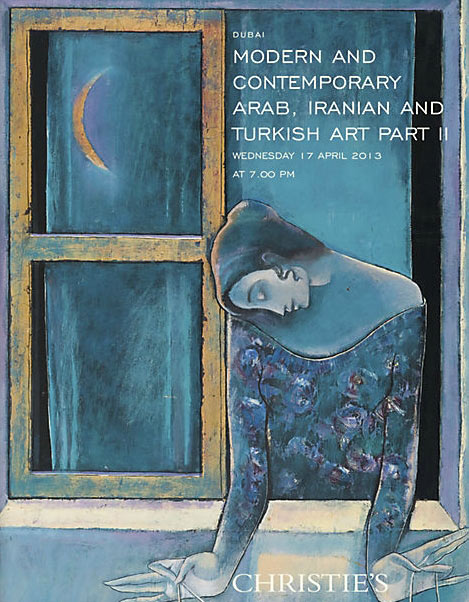 The highest value work in the sale is a seminal piece by Iranian Farhad Moshiri (b. 1963) entitled Secret Garden from 2009, which is one of the few works that depicts the artist’s self-portrait (estimate: $300,000-500,000). Another highlight of the sale is a monumental painting by Syrian pioneer Fateh Moudarres (1922-1999) dated 1960, representing a faceless crowd, stripped of their identity, alluding to the political events and social tragedies in the Middle East at the time (estimate: $150,000-200,000; shown above).

We are fortunate to have two portraits by Syrian master, Louay Kayyali (1934-1978), in the Part I sale. The charming and subdued Young Boy with a Watering Can (estimate: $50,000-70,000) and the captivating Boy Reading (estimate: $80,000-120,000) are both prominent examples from the 1960s. Active during a time of immense upheaval in the Arab world, Kayyali was one of its most prominent socio-political artists. His powerful depictions of ordinary people are characterized by strong fluid lines and an absence of detail that focuses attention on the people without distraction.

An exciting addition to the contemporary works in the Part I and Part II sales are three exclusive photographs by Lalla Essaydi whose work is well represented in some of the most prestigious institutions and private collections around the world and is much celebrated in the United States, where she is based. Born in Morocco, Essaydi combines the skills of the artist and the photographer, using calligraphy in henna to embellish her work. The compositions, often inspired by 19th century orientalist paintings, depict Arab women and explore the representation of femininity in the Arab world. The funds raised by their sale will support the publication of the artist’s upcoming monograph.

Another highlight from contemporary works in the Part I sale is a vibrant and joyous canvas by Huguette Caland (Lebanese, b. 1931) entitled Winter in Venice, Ca. painted in 2011. The work is a perfect example of the artist’s technique depicting the bright pink, muted green and blue colours of a winter day in her adopted home by the sea in California (estimate: $50,000-70,000). 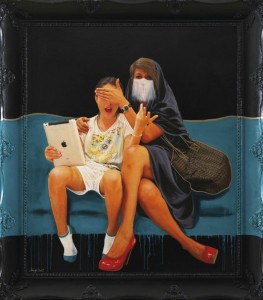 Highlights from the Turkish selection featured in both sales include a delicately carved panel by Arzu Akgun, Model II showing a beautiful woman with bright red luscious lips and a blindfold made of lace, set against a vivid background, (see here – estimate: $6,000-8,000). We are delighted to offer a bronze sculpture by Yasam Sasmazer, depicting an apparently innocent young girl holding a balloon in one hand and a needle in the other (estimate: $12,000 – 18,000).

By Arwa Abouon, a Libyan artist is Juan Nuwarr a digital print in a lightbox, from an edition of three, created in 2008 and showing two young boys in an old sepia photograph, with 3D glasses super-imposed on their faces – a powerful juxtaposition of what was then young and must now be old with the jarring, brightly coloured glasses. This is the first time that the artist’s work has been offered for sale at auction before (estimate$4,000-6,000).