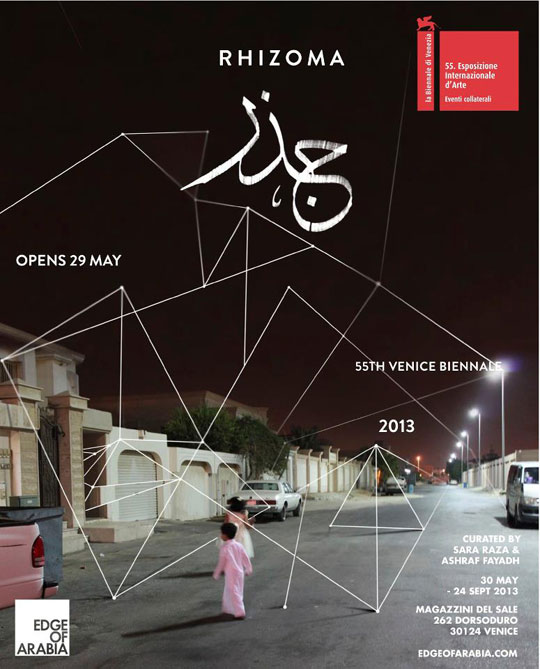 Edge of Arabia, with support from Abdul Latif Jameel Community Initiatives, are proud to return to the Biennale di Venezia with a Collateral Event titled Rhizoma (Generation in Waiting).

Curated by London-based art critic and independent curator Sara Raza and Saudi-based poet, curator and artist Ashraf Fayadh, Rhizoma draws its inspiration from an emerging younger generation of Saudi artists, whose works embrace multiplicity alongside new artistic vocabularies in technology, science and natural philosophy. The exhibition’s premise draws from the actual rhizoma, the ancient Greek word for the underground root of a plant that shoots its roots both horizontally and vertically, as a metaphor for a bold new generation of artists who are challenging the force of gravity through inspiring projects.

Lead curator Sara Raza explains: “Rhizoma is a curatorial project with infinite possibilities to form multiple endings and create new beginnings. The nature of Saudi Arabia’s art production is comparable to an actual rhizoma. There is an exciting emerging art scene inside Saudi Arabia that exists at the grassroots and it is purposefully making its ascent upwards. These artists are part of a subterranean network, independent and distinctive in their styles and approach, technologically astute, experimental and possess the ability to break away from the mainstream.”

Ashraf Fayadh elaborates: “We aim to provide a clear vision of the radical transformation in Saudi art, which is now more affiliated with its roots, to the real culture represented by the awareness of the different living conditions in Saudi Arabia. This awareness is creating a strong message from a new generation of artists to formulate art in their own way.”

Edge of Arabia founders Ahmed Mater and Abdulnasser Gharem will also be present in the exhibition through collaborations with selected artists as part of their foundations, Ibn Aseer Foundation and Amen Art Foundation, respectively.

Accompanying the project a series of artist talks and in-conversations will be streamed via the internet, cross-connecting the exhibition with audiences in Saudi Arabia and internationally.  A full catalogue will accompany the exhibition including a curatorial essay by Sara Raza, poems and an Instagram diary by Ashraf Fayadh and interviews amongst leading artists and cultural practitioners inside and outside of Saudi Arabia.

Edge of Arabia
Edge of Arabia is an independent arts initiative developing the appreciation of contemporary Arab art and culture with a particular focus on Saudi Arabia. As a social enterprise Edge of Arabia is committed to reaching local and international audiences and improving understanding through free exhibitions, through publications, and through an education programme incorporating talks and seminars, artist residencies and vocational training. Following its launch in London in 2008, this grassroots initiative has travelled to Riyadh, Berlin, Istanbul, Dubai, Jeddah, twice to the Venice Biennale and most recently to London’s Brick Lane with #COMETOGETHER. www.edgeofarabia.com

Sara Raza
Sara Raza is a PhD candidate at the Royal College of Art, London, an independent curator, editor for ArtAsiaPacific magazine (West and Central Asia) and consultant editor for Ibraaz. She was the founding head of curatorial programmes at Alåan Artspace in Riyadh, Saudi Arabia and is an associate curator at the Maraya Art Centre, Sharjah and the Artist Pension Trust. Since 2010 she has been a visiting lecturer at Sotheby’s Institute of Art, London, for the MA Contemporary Art programme and is a former curator at Tate Modern.

Ashraf Fayadh
Ashraf Fayadh is a Palestinian poet, curator and artist currently living in Abha, Saudi Arabia. His collection of poems, Instructions Within, was published in 2007 by Al-Farabi Publishing House in Beirut, and was listed by the Al-Hayat newspaper in London as one of 2008’s best-selling books across the Middle East. He is a founding member of the influential Shattah group of artists and recently curated Mostly Visible, a groundbreaking exhibition for Saudi contemporary art, as part of Jeddah Art Week.

Founding partner: Abdul Latif Jameel Community Initiatives
ALJ Community Initiatives was established in 2003 as the corporate social responsibility programmes provider under the prominent ALJ Group. It has global coverage through its many initiatives and social programmes. ALJ Community Initiatives have developed and promoted a portfolio of globally applicable sustainable projects and solutions, supported socio-economic development by providing social programs for the needs of communities, and brought about a reduction of unemployment and poverty through novel and innovative schemes and mechanisms. www.aljci.com