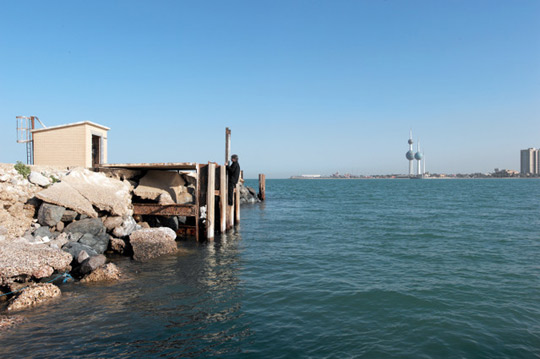 Usually his landscapes are deliberately bleak. Tarek Al Ghoussein has spent the best part of two decades photographing a series of self-portraits within particularly empty environments such as deserts, construction sites and crossroads – and mostly in the UAE.

We see him but we don’t see his face and so he opens a conversation about identity and invites the viewer to question, along with him, where we belong. It is a common theme among the displaced Palestinian population but through many series (named A-E), Al Ghoussein’s art has moved from the early days of covering his face with a kaffiyeh to more open-ended existential statements, where his anonymity speaks louder than any obvious symbols.

From a Palestinian-Kuwaiti family – his father was a journalist, a newspaper editor and diplomat – Al Ghoussein was born and brought up in Kuwait, and considers himself as belonging to both nationalities. He moved to the US to study, then to the UK.

When his plans to return to Kuwait in the 1990s were thwarted by the Gulf War, he settled in the UAE. He taught photography at the American University of Sharjah for 15 years and is now a professor of visual art at New York University’s Abu Dhabi campus.

The K Files consists of eight photographs, where Al Ghoussein has shot himself inside the stock market, a dilapidated palace, a football field, an old school and in perhaps his most striking image, beside the site of Kuwait’s first attempt at off-shore oil drilling with the famous water towers spiking the horizon in the distance. “I wanted to separate the work from the other series,” he explains. “After all, the desert in Kuwait doesn’t look much different from the desert here. However, for me the work is about all the images together. Like the rest of my images, they still work in a sequence.”