Invisible Light is an encounter between a painter and a sculptor – between two and three dimensions, relief and color, oil and bronze, words and shapes. The calligrapher-artist Mehdi Qotbi and the sculptor and designer of objets d’art Yahya present seventeen works that magnificently encapsulate the dialogue between the two artists in an imaginary language that freely reinterprets the calligraphic tradition in Islamic art.

Together the two artists have created a series of intricately interwoven signs and letters that create a new form of abstraction. The three-dimensional calligraphy is infused by light that is by turns immanent and transcendent, conferring a quasi-magical aura on the sculptures, shown for the first time in Zaha Hadid‘s unique new exhibition space at the Institut du monde arabe in Paris. The sculptures are immobile, yet somehow shimmer and dance, suggesting a world of light and shade. The abstract forms consist of arbitrary signs bearing no explicit message, yet still recount an epic, poetic narrative of the encounter between East and West, where cultures change each other through exchanges, and where artists invent contemporaneity by dreaming of an age-old calligraphic tradition with universal relevance.

Yahya and Mehdi Qotbi’s exclusive exhibition presents seventeen UAO’s (unidentified artistic objects) like newly hatched stars in the skies of creation, striving for formal perfection over meaning. By setting out on a quest to seek impossible, paradoxical “invisible light”, Yahya and Mehdi Qotbi have made their mark in art’s greatest adventure: the search for absolutes. 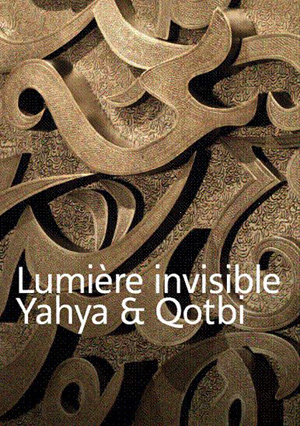