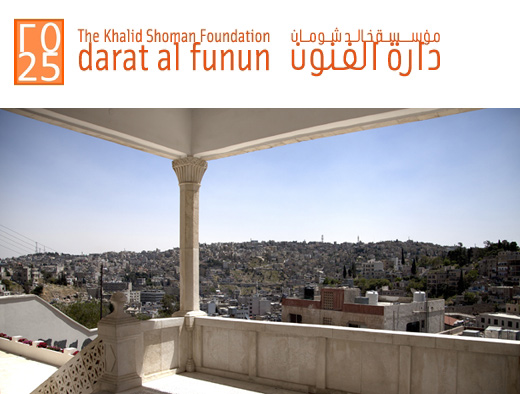 HIWAR | Conversations in Amman is an exhibition, residencies, and talks program organized by Darat al Funun to celebrate 25 years of support for the arts. HIWAR brings 14 artists from the Arab world, Africa, Asia, and Latin America to Amman for residencies in September and October 2013, culminating in an exhibition opening on 9 November 2013. The exhibition will also feature works from The Khalid Shoman Collection, including Akram Zaatari, Emily Jacir, Mona Hatoum, Wael Shawky, and Walid Raad.

HIWAR (meaning conversation in Arabic) is born out of the necessity to promote exchanges between artists from the margins, not solely by juxtaposing their works in an exhibition or publication format, but also by giving them the possibility to learn from each other’s practices and experiences. Large-scale exhibitions and biennales have brought together works from different regions beyond Euroamerica, yet often artists do not have a chance to immerse themselves in this exchange.

HIWAR proposes a more intense format, with a small number of artists that spend a month in Amman in two sessions (in September and October 2013). The focus is to develop conversations between the participants, who will each present and discuss their work and context with their colleagues during the residencies, in the lead up to the exhibition. The core conversations are led by Adriano Pedrosa, curator of HIWAR, and Eline van der Vlist, artistic director of Darat al Funun. Avoided here is the format of the artist being invited to conduct a residency in order to make new work in response to the new locale in which s/he finds him or herself. The core is to learn in and from Amman—as well as from Beirut, Cairo, Cuzco, Hanoi, Istanbul, Johannesburg, Luanda, Manila, Mumbai, Ramallah, Recife, and São Paulo.

There is no all encompassing theme or concept linking all the artists and their works in HIWAR beyond the artist’s geo-cultural origins and positions (shifting as these may be). Yet, such positions are also somehow loaded and revealing. One could think along the lines of the Argentine semiotician Walter Mignolo, I Am Where I Think.

A talks program will be announced. A publication will be published after the opening, not only to document the exhibition, but also to record some of the conversations and reflections emerging from HIWAR.

Darat al Funun is a home for the arts and artists from the Arab world. We trace our beginnings to the opening of a non-profit gallery in Amman in 1988, and are now housed in six renovated historical buildings with a restored archaeological site in the garden. Darat al Funun organizes exhibitions, talks, film screenings and educational programs, hosts performances and concerts, offers a PhD fellowship and artist residencies, and publishes books and catalogues.

HIWAR | Conversations in Amman
An exhibition, residencies, and talks program