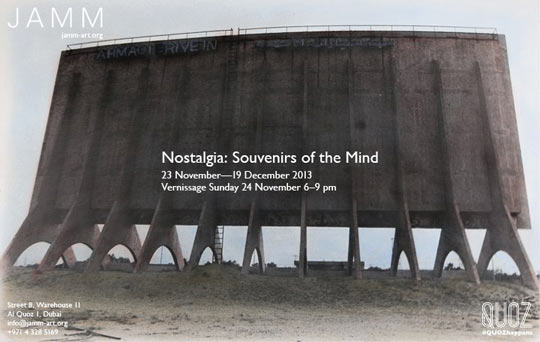 JAMM Art in collaboration with Albareh Art Gallery proudly presents Nostalgia: Souvenirs of the Mind, a group exhibition bringing together a number of cutting-edge artists from the Arab world, exploring the architecture of memory sites throughout the region and proposing a temporal break from the intoxicating business of sheer living, gazing into a past that sometimes appears as frozen and sometimes as imagined.

Mohammed Al-Kouh’s photographic project Tomorrow’s Past is an attempt to map out architectural landmarks erected during Kuwait’s Golden Era, as the country first embraced the paradoxes of modernity, in hand with independence, economic development and the need to create expanded living spaces that provide the public domain with the assurance of durability.

The works of Camille Zakharia, Stories from the Alley, sited in the island of Muharraq in Bahrain, complement Al-Kouh’s practice, capturing the all too present traditional architecture of Bahrain and presenting it as a captivating archaeological document, fraught with traces of codes already forgotten, but yet inscribed in the living walls of consciousness, often forgotten under the debris of unconsciousness yet altogether present.

Mohammed Al-Mahdi and Annie Kurkdjian explore nostalgia from a different perspective, less architectural and more personal. Al-Mahdi’s paintings, in the signature style of the Bahraini painter, are an unprotected journey between often fading and hostile memories. Kurkdjian, on the other hand, is depicting the emotional and physical transformations of the body under circumstances of conflict and violence, reflecting on her own experiences during the decades-long Lebanese Civil War.

Exhibition will continue until December 19, 2013