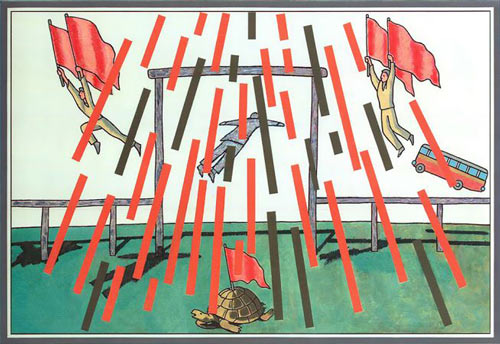 Sharjah Art Foundation (SAF) presents Ilya and Emilia Kabakov: A Collective Memory, an exhibition that traces the life and work of Ilya and Emilia Kabakov. American artists born in the Soviet Union, their work fuses elements of the everyday with those of the conceptual. While often rooted in the Soviet social and cultural context in which they lived, their work attains a universal significance that contemplates failed utopias around the world.

Works in the exhibition include a series of paintings from ‘Four Paintings About Freedom’, Suprematist Painting which turn out great, With my respect to my Teacher Charles Rosenthal, as well as two installations: Memorial to Useless Things and The Blue Carpet.

Whilst describing Memorial to Useless Things, Ilya and Emilia Kabakov stated: “…because they are useless for whom? For somebody else. They always hold memories, and everything that is useless for somebody is always useful for another person. It is a memory, its part of your life. Nothing is useless in reality. We have another memorial, Memorial to Unknown People, so that’s from the same category. It is a very deep idea of the memory because a huge monument is a memory of the society, of history now.

The Blue Carpet is an installation where visitors remove their shoes and enter a space that is covered by a large blue carpet with geometric designs. Small-scale drawings and texts in frames have been placed against the walls along the entire perimeter of the room. Visitors must sit or lie on the carpet in order to view these works, creating a sense of informality and intimacy. Ilya and Emilia Kabakov stated: “It is about two levels. Usually we look at the artwork at eye level. In this case it is on the floor, so in order to look at it you have to lie down and be on the same level as the art…you have to lower yourself down to be with it, you are still in the sky, but you see reality around you.”

Exhibition is ongoing until February 23, 2014