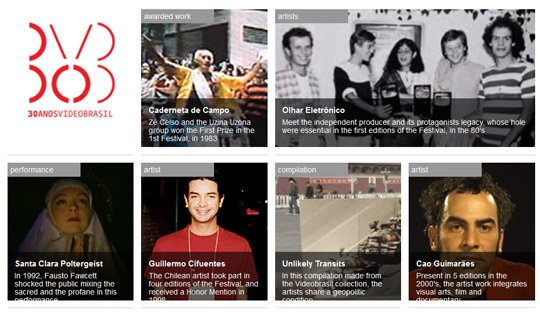 As part of its 30th anniversary celebration, the Contemporary Art Festival Sesc_Videobrasil makes available one of the largest, most diverse collections in Latin America.

Have you ever watched the video Caderneta de Campo (1983) by Zé Celso Martinez Correa, about resistance against the demolishing of theater group Teatro Oficina’s headquarters (designed by the Italian architect Lina Bo Bardi) by the Brazilian media and retail conglomerate Grupo Silvio Santos? What about Garotos do Subúrbio, the first documentary film by the then-fledgling filmmaker Fernando Meirelles (City of God and Blindness)? These two seminal works for the consolidation of video language in Brazil are available at the Videobrasil Video Library alongside rare videos like the ones of the Lebanese Akram Zaatari, of the Moroccan Bouchra Kalili, and others such as Video Opera for Paik, by Steina Vasulka and Stephen Vitiello, which recreates the work structure of Nam June Paik; videos by artists of worldwide renown, like Bill Viola and Gary Hill; and the performances and artworks featured this year, in the 18th edition of the Contemporary Art Festival Sesc_Videobrasil, open until February 2, 2014 in São Paulo.

The Video Library is a space designed to publicize videos and enable research, comprising Videobrasil Collection pieces and works shown publically for limited periods of time.

To the curator Agustín Pérez Rubio, the collection of Videobrasil possesses a unique feature, namely that aside from presenting “a perfect overview of audiovisual in Brazil, it is contextualized historically and geographically within the collective imagination of the South,” says Pérez Rubio, former exhibitions curator of the Venice Biennale and director of the Museum of Contemporary Art of Castilla y León – Musac. In fact, since 1992, Videobrasil has dedicated itself to mapping out contemporary production in Latin America, the Caribbean, Africa, the Middle East, Eastern Europe, Southeast Asia and Oceania.

Presently, the artwork is only viewable offline, but there are plans of making the Video Library and the entire Videobrasil Collection available at www.videobrasil.org.br and in a new place at São Paulo, with room for research. “Granting the public access to the Video Library works is a step forward in our mission to spread contemporary art and to document the history of national and international video production in the last 30 years, extending beyond the biennially held Festival and the major shows we hold in between festivals,” says Solange Farkas, Videobrasil’s creator and general curator.

“It is an atypical and, therefore, invaluable collection. It contains everything from works of art to television shows, interviews, performances and all sorts of works from the very well-defined geopolitical target area, and this makes it unique,” says Agustín Pérez Rubio.