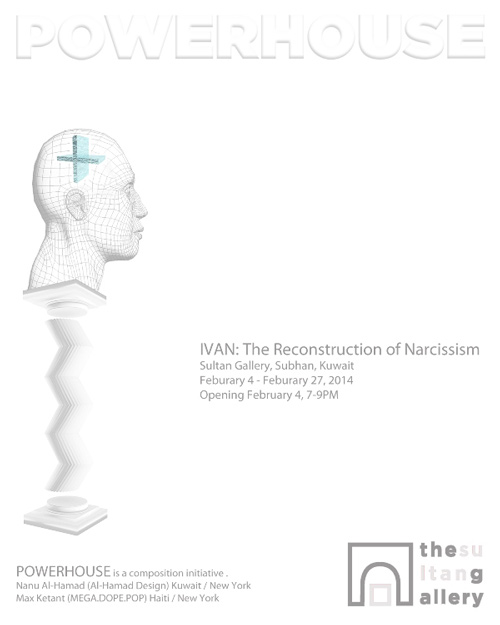 IVAN: The Reconstruction of Narcissism, a debut composition by POWERHOUSE, explores the notion of using architecture and design as a vehicle for self-transformation by holding the design philosophy : “We are products of our products, therefore our products must reflect and encourage our own self development.” Rather than taking the approach from a conventional design perspective, POWERHOUSE brings artistic motivations to the fore, thus reconstituting the traditional role of the viewer from audience member to user.

Narcissism, as it is defined today, is a surrounded by a stigma of shallow self-obsession, discouraging true objective introspection. However, in their retelling of The Myth of Narcissus, POWERHOUSE imparts new potentiality on the ‘narcissistic condition’, expanding it to a state of revelation rather than one of self-infatuation. In this re-imagined, revelatory state, the water reflects a transcendent and transformed Narcissus, one free from external and internal compunction. This reconstruction presents narcissism as the acme of the human experience and as a product of complexity, rather than superficiality and obsession.

Each of the pieces encourage a stage of development through their individual characteristics, from form to function. The pieces Dither and Mull embolden the reconstructive process of narcissism, facilitating the users potential to develop. Adamantine and N+ stimulate the final stages of reconstruction, assisting the user’s culmination in this evolutionary process. The central piece of the environment, Ivan, serves as a division, or barrier of consciousness, by separating the pieces; urging the user to advance and progress. Together, the pieces serve to vitalize, and ease the user through the stages of this reconstructed narcissism.

The environment created is magnified by the implementation and focus on texture, specifically of those materials re-examined from the Kuwaiti industrial market. POWERHOUSE reintroduces outdated materials, which are the majority of what is currently available in this market, to create a hyper modern aesthetic while maintaining the practicality of function. Echo, an encompassing soundscape by Chicago’s The-Drum, completes the environment of IVAN – an experience which beseeches the viewer to seize the opportunity to reflect, to reverberate within one’s own interior long enough so that eventually, the deep, muddled desire to reconstruct our own reality grows as clear as our mirrored image.

Nanu Al-Hamad is an award-winning industrial designer and artist. His work as founder and Director of Design of the Al-Hamad Design Studio, a design firm focusing on high-end furniture, lighting, object design, and custom made pieces, is shaping a new movement in design. He was awarded the 2012 A’ Design Award in Furniture for his modular Gibbous chair and ottoman. Working between west and east, Al-Hamad has shown work in Kuwait and New York. Additionally, Al-Hamad is a member of the arab gulf GCC art collective, who are showed this past fall at Kunsthalle Fridericianum in Kassel, Germany, Sultan Gallery in Kuwait, Project Native Informant in London, and Gallery Kraupa-Tuskany Zeidler in Berlin.

Max Ketant is a New York based conceptual designer and creative director fusing elements of magic realism, mythology and graphic design. His work through MEGA.DOPE.POP. focuses on the use of fantasy narrative to resolve the contradiction between dream and reality. His most recent show SVN: Hi Fi created a new discourse in the art experience where he reimagined a living space as a movie set where in which viewers became active participants in the exhibition. With his iconographic art house MEGA.DOPE.POP. he intends to translate quantum mechanics into an aesthetic media that will create a global discussion on contemporary mythology through the use of design.

Exhibition will continue until February 27, 2014