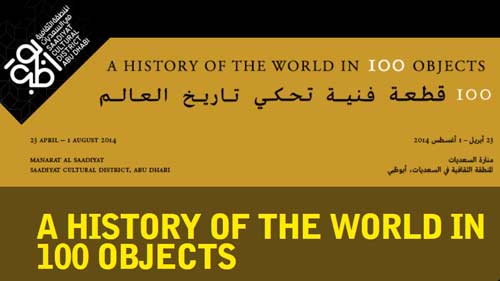 Offering a glimpse of the eagerly anticipated Zayed National Museum, TCA Abu Dhabi has collaborated with the British Museum to present A History of the World in 100 Objects; an inspiring exhibition that captures both the history of the world and the significant role the Middle East has played within it, through a vivid display of compelling objects. Third in a series of major exhibitions leading to the opening of Zayed National Museum in 2016, this exhibition will be held at Manarat Al Saadiyat in Abu Dhabi’s Saadiyat Cultural District until 1st of August, 2014.

The first time the popular BBC series has been shown as an exhibition, A History of the World in 100 Objects features personal objects, such as the Chinese Jade Hair Ornament (dated c.3500 BCE), whilst also showcasing other objects that were made for whole communities to use, including the Bird-shaped Pestle from Papua New Guinea (dated 6000–2000 BCE). Objects such as the Hebrew Astrolabe (dated 1345–1355 CE) from Spain, were designed to advance human understanding of the world around us, whilst others represent the surviving relics of lost civilisations, such as the Mexican Huastec Sculpture (900–1521 CE). Allowing visitors to travel back in time and across the globe, people can explore how humans have shaped the world, and been shaped by it.

In line with some of the themes that will define Zayed National Museum, such as faith and Islam, people and heritage, and science and learning, this exhibition will help visitors discover more about humanity and the progress of human life.

The exhibition also explores several important objects from the Middle East and the UAE; elements from cattle farming in Northern Iraq in 5600–5200 BCE, an object from the famous Ancient Middle Eastern city of Ur; another that demonstrates the spread of Islam in the 7th Century and finally a modern foot-controlled car invented by Emirati students that changed lives of disabled drivers.