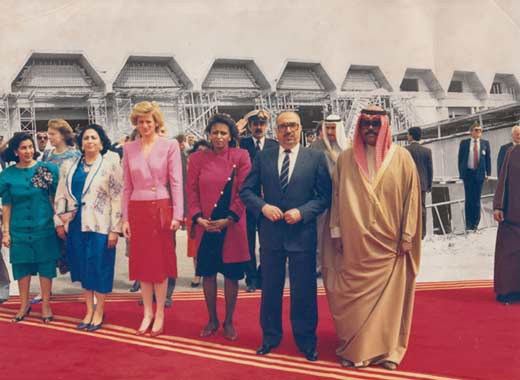 Commissioned by the National Council for Culture, Arts and Letters, Kuwait’s pavilion at the 14th International Architecture Exhibition of la Biennale di Venezia will take place from June 7 until November 23. Housed in the Arsenale, Acquiring Modernity is Kuwait’s second participation after Kethra, which debuted at the 13th International Architecture Exhibition in 2012.

Under the supervision of deputy commissioner Zahra Ali Baba and the creative direction of artist-curator Alia Farid, Acquiring Modernity will address the exhibition’s overarching theme of 100 years of modernity from 1914 to 2014.The pavilion will explore symbols of modernity in Kuwait’s architecture, with a special focus on Michel Ecochard’s Kuwait National Museum, designed in 1960 and completed in 1983.

“The pavilion will investigate the arrival of modernity in Kuwait through a number of buildings and projects commissioned by the state as ‘modern status symbols,’ particularly the Kuwait National Museum,” said Farid. “The investigation will also analyze the current conditions of these buildings towards understanding the impact of modernity on local culture—whether modernist ideals were assimilated, altered, neglected, rejected—and what those reactions convey about contemporary society in Kuwait.”

At the inauguration of Acquiring Modernity, participants will restage the celebratory opening of the Kuwait National Museum in 1983. During the rest of the six-month exhibition, they will continue developing their investigations regarding the role of the museum and the rehabilitation of its programs. Kuwait’s participation in Venice is only one moment of visibility from a larger project that aims to restore rigorous cultural involvement in the country.

Accompanying the pavilion is a research publication available in English and Arabic, a film set for release in November, and a joint installation with the Nordic Pavilion.