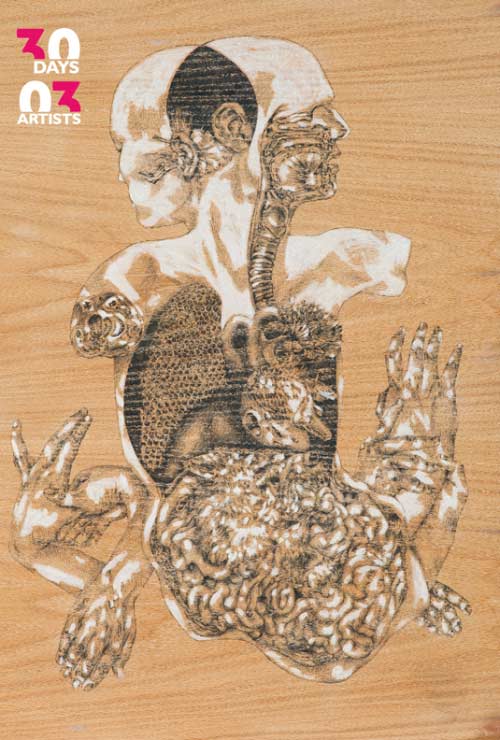 My First Solo show / 30 Days 3 artists, is a project presenting young emerging Kuwaiti artists for their first solo exhibition at The Art Room gallery, one of Contemporary Art Platform’s exhibition spaces. This project gives an opportunity for 3 young artists every year to show their work for 10 days within a reflective artistic community supported by CAP Kuwait.

The second artist in this project is Zahra Al Mahdi who’s paintings highlight the connections and inter dependencies between seemingly autonomous bodies; it emphasizes the intersections between human beings, animals, plants and objects.

The bodies addressed in the collection are given deliberate “improper” functions to dissociate their assumed meaning from the prevalent system they function in. This exposure demarcates how intersecting bodies encounter, merge, impact, and even create one another in an ongoing process of metamorphosis.

The richness of the unlikely interaction between bodies inverses habitual signification, changes perception of predetermined roles, and destabalizes human centric hierarchies. By questioning the normativity of utilitarian meanings and functions assigned to such bodies, this collection challenges the dominant logic of the “origin,” the “absolute,” and “nature.” It also posits alternative ways of coexistence.

Zahra Al-Mahdi (1989) is an English Literature graduate from Kuwait University, College of Arts. She mostly paints, draws, and writes and illustrates graphic fiction. And she is currently enrolled in Kuwait University’s Master’s program in Comparative Literary and Cultural Studies.

Exhibition is ongoing until 5th of May, 2014