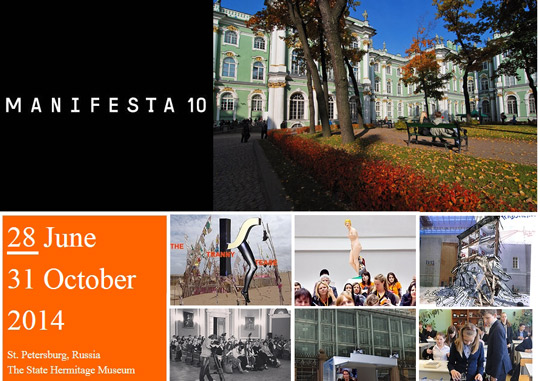 MANIFESTA 10 includes newly commissioned works for various public spaces throughout the city of St. Petersburg. Participating artists include Pavel Braila (Moldova/Germany), Lado Darakhvelidze (Georgia/Netherlands), and Alevtina Kakhidze (Ukraine). MANIFESTA 10 critically responds to the current social- political circumstances, its conflicts and complexities in Russia and Ukraine. A series of time-based projects will intervene in the city of St. Petersburg and its cultural, historical, and social complexity with context-responsive commissions and debates, events, pop-up shows, and discursive platforms as an integral part of the exhibition. The public program is curated by Joanna Warsza.

Since autumn 2013, the education program devised by Sepake Angiama has been exploring the social framework of spaces where the people of St. Petersburg come together to learn through initiating a program of MANIFESTA 10 Dialogues in universities and Art Laboratory in schools. Participating St. Petersburg-based artists have included Pavel Brat, Alexander Efremov, Olga Jitlina and Evgenia Golant. The program continues with ‘Please Mine the Gap,’ a Summer School developed in partnership with the State St. Petersburg University Faculty of Liberal Arts and Sciences (Smolny College) and the Zürich University of the Arts (ZHdK) which will explore artistic enquiry and engagement of space led by experimental filmmaker, curator and writer Maria Godovannaya. More than 2,000 people have participated in the pre-Biennial program and a further 10,000 students have already pre- booked for programs to take place during MANIFESTA 10.

Extending beyond the State Hermitage Museum, the Manifesta Dacha is a mobile platform designed by Dutch Bureau Ira Koers and Studio Roelof Mulder. The Manifesta Dacha program includes Cyland Media Art Lab, Yuri Shtapakov and Peter Berezin, who will trigger conversations with the public through interventions, workshops and discussions in the city of St. Petersburg.

Manifesta was conceived in the early 1990s as a nomadic, European biennial of contemporary art, responding to the new social, cultural and political reality that emerged in the aftermath of the Cold War. Formed from the desire to explore the psychological and geographical territory of Europe and provide a dynamic platform for cultural exchange throughout the region, it takes place every two years in a different European city. Along with the Venice Biennale and documenta in Kassel, Manifesta is one of the foremost art events in Europe.

Since 1996, Manifesta has taken place in Rotterdam, Luxembourg, Ljubljana, Frankfurt, Donostia/San Sebastián, the regions of Trentino–South Tyrol and Murcia, and most recently Genk in Belgium. Over the course of its nine Biennials and twenty years, over a million people have visited Manifesta’s events and participated in its programs. It has successfully presented artists, curators, young professionals, and trainees from as many as forty different countries, and in each edition continues to innovate and reimagine contemporary art practices. The tenth edition will be hosted by the State Hermitage Museum in St. Petersburg, Russia and will run from June 28 until October 31, 201

One of the oldest and most prestigious museums in the world, the State Hermitage Museum was founded in 1764 by Catherine the Great as her personal art collection and has been open to the public since 1852. The Museum is renowned for its collection that includes more than three million works of art and artefacts of world culture. Among them are paintings, graphic works, sculptures and works of applied art, archaeological finds, and numismatic material.

Situated in the center of St. Petersburg, the Hermitage consists of a grouping of architecturally significant buildings: the Winter Palace, the former state residence of the Russian emperors; the buildings of the Small, Old (Great) and New Hermitages; the Hermitage Theatre; and the Auxiliary House. The museum complex also includes the Menshikov Palace, the Eastern Wing of the General Staff Building, the Staraya Derevnya Restoration and Storage Centre, and the Museum of the Imperial Porcelain Factory.

In 2014 the Hermitage celebrates 250 years of existence. The newly renovated General Staff Building, the new premises of the State Hermitage Museum dedicated to modern and contemporary art, is fully open in 2014, as the main stage of MANIFESTA 10.