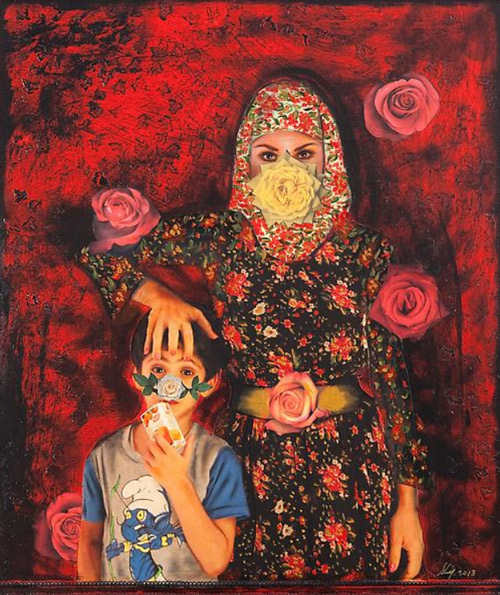 Ayyam Gallery Dubai (DIFC) is pleased to invite you to the opening of We’ll Build This City on Art and Love, a solo exhibition of mixed media works by Kuwaiti artist Shurooq Amin.

In We’ll Build This City on Art and Love the roles of women in Arab society remain central for the artist, however, moving away from the individual Amin further reflects upon a variety of social maladies, ranging from child marriage in war-affected areas to the marginalisation of the Bedoun in Kuwait, and the moral and material ramifications of stalled “dream” construction projects such as Silk City.

In the combining of various media, the use of bright pink and red, tongue-in-cheek imagery, and a sense of whimsy, Amin’s canvases are vivacious even while approaching subject matter of a serious or delicate nature. In We’ll Build This City on Art and Love the artist employs materials as diverse as wood, reclaimed photographs, and Braille; the materials imbued with their own set of histories and tactile possibilities come together to insert new complexity into Amin’s chosen artistic themes. Authors long admired by Amin, including Syrian poet Nizar Qabbani and British author Lewis Carroll, are among several influences found in these visual motifs.

Born in 1967 in Kuwait, Shurooq Amin is an interdisciplinary art practitioner of Kuwaiti-Syrian background. In addition to being a visual artist with thirteen solo exhibitions to date, she is a Pushcart Prize nominated poet with a doctorate in Creative Writing and Ekphrasis from Warnborough College, England. In 2013, Shurooq was awarded the title of “Artist of the Year” by the Arab Woman Awards, Kuwait chapter.

The exhibition opening will be accompanied by the launch of Shurooq Amin, a monograph exploring the intricacies of Amin’s decades-long career through comparative discussions of her works within the broader milieus of international art and literature.
Exhibition Dates: 14 September – 23 October 2014
Location: Gate Village Building 3, DIFC, Dubai