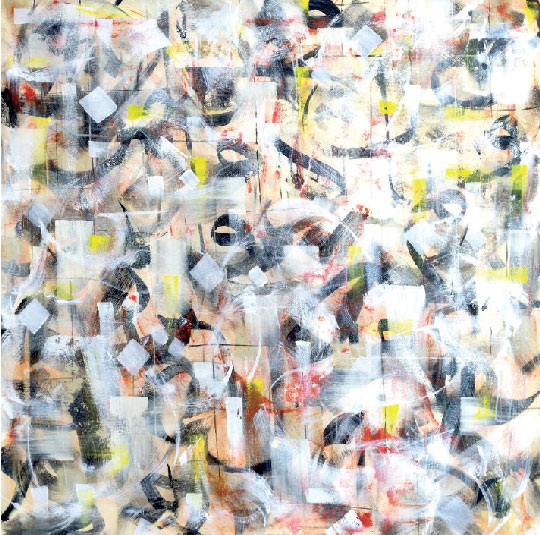 in the presence of the artist

Decisions, the new artworks for the exhibition by Sabah Arbili, not only continues the unbinding of classical Arabic literature and Art from itself, but it does so at the intersection of migrations, forced or otherwise, that compels a remarking of the pathways of decision-making.

While doing what all decisions do, cut us adrift from what was, into what is, Arbili’s calligraphy asks who is making the decision, what is it marked against, how does it look from political to theatrical representability, from empowered networks to the chaos facing those who are left without the decision.

More importantly, how can modern calligraphy help us see the process of dislocation differently? Is that very process, the moment at which a decision is made, a cutting ourselves adrift from centered positions to the chaotic present.

Born in Iraq, Sabah Arbilli studied Masters in Visual Arts, at the University of Wales. Currently he is based in the UK and Qatar. He works as a full time artist.
Exhibition is ongoing until Thursday 28th January, 2016

Sultan Gallery: Opening of STILL by Hendrik Kerstens & ...
Dar Al Funoon Gallery: A Master and his students
CAP: Lecture ” The Role of Landscape in Contemporary S...