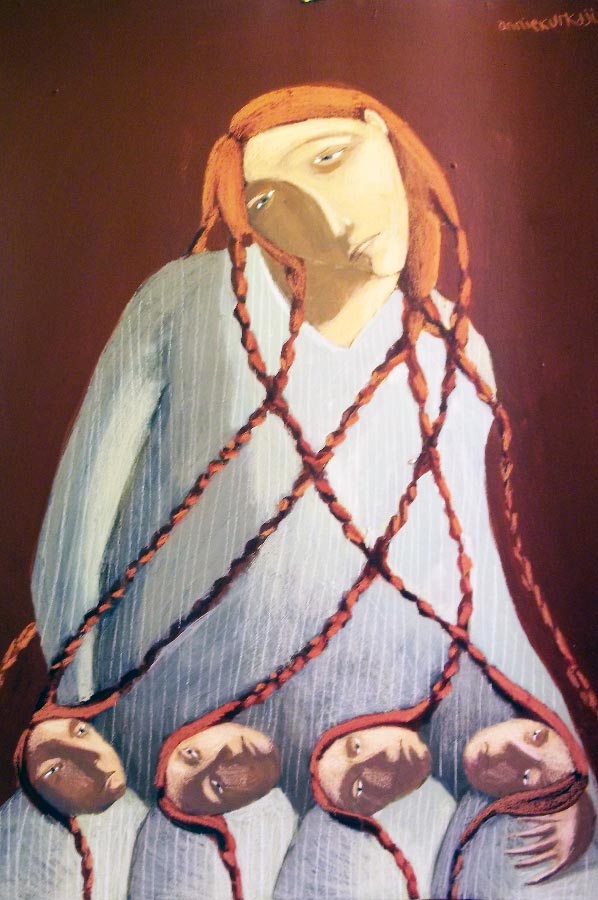 The subjects in Kurkdjian’s paintings are not simply abject in unmediated horror, but also circumscribed by an absence of both subject and object, fixing their gaze onto an empty space of missing referents, whose source is unavailable to the observer. While there is a constant of despair, representation finds no finality in a work that is largely informed by philosophy, film and theology. The deformed bodies are not ultimately corrupted and abandoned to the biological cycles; there is also a search for mercy, love and dignity, through humorous references and laconic gestures. In the world of Annie Kurkdjian, there is a feeling of exposure and shame, of covetousness. The artist, a reader of both Rimbaud and Pasolini, wants to live with the illusion of living without illusions, and yet at the threshold of hope.

Annie Kurkdjian was born in Beirut, Lebanon, in 1972 and lives and works in Beirut, or “the orgy of Beirut”, as she prefers to call it, herself profoundly informed by the Lebanese Civil War and this theatrical stage of conflict and war. But unlike the painters of her generation, Kurkdjian is not searching for an escape into an idyllic site of solace and consolation, or obsessed with the literal representation of war. The horrors and trauma of war are translated in her work as warm intimate spaces of metaphor and embodiment: Transformations of the body, psychological horror, paralysis and deformity. Her paintings are conceived as academic studies on fear and psychosis: How to represent myself through different stages of mutilation, torture, and ultimately, the impossibility of redemption.