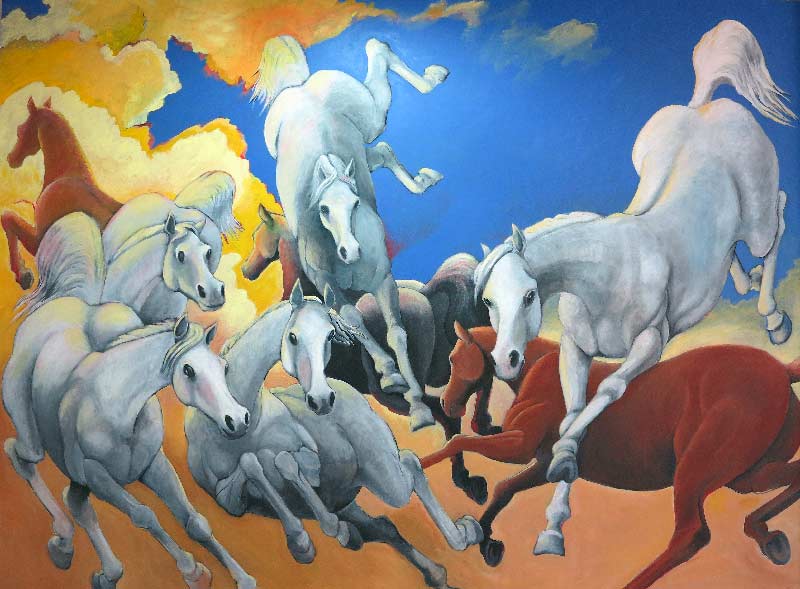 A protagonist climbs the trees, picks the flowers, or rides the horses that populate the painted nature scenes in the exhibit, Paradise Lost… and Found, the first solo exhibition of Dr. George Bauer in Kuwait. The images in these paintings engender a symbolic and conceptual relationship between humanity and nature that is complex and multi-layered in meaning. The human figures, animals, flowers and trees are used as symbolic vehicles of beauty, peace, and tranquility but also of loss, death, and environmental concerns.

Since Dr. Bauer created all of these artworks while living in Kuwait, he also wanted them to reflect an Arabic spirit, specifically its equestrian history and culture. Dr.Bauer has a deep knowledge of horses, having trained them in Texas at one time, and found the Arabic love of horses to be in accord with his own passion. While he was living in Kuwait, he chose to explore subjects in painting that would bring dynamic movement into his canvases along with a complex visual interplay of narrative and design. The unusual perspectives and points of view, combined with technical virtuosity, reinforce the unique visual intricacy of his creations.The works in this exhibition represent the newest phase in his ongoing development as an artist and display unusual bravado and mastery of the medium.

Dr. Bauer has taught art and design at the American University of Kuwait for the past five years. He came to Kuwait in 2011 from the Savannah College of Art and Design in the USA, where he had been teaching for the previous six years. Originally, Dr. Bauer is a native of former Czechoslovakia where he was a television journalist. He escaped the country in 1976 while it was still behind the “Iron Curtain” and became an American citizen. He has made a living from his artworks and teaching ever since.

Dr. Bauer is both a figurative painter and a sculptor, with a passion for working in marble and limestone. His artworks are in private collections in the USA and Europe, and his work has been exhibited over the past 25 years in Texas, New York, Georgia, Colorado, California, Alaska, and in Kuwait. Dr. George Bauer’s other passions are traveling the world, hunting, fishing, and riding horses in the American West and Alaska.